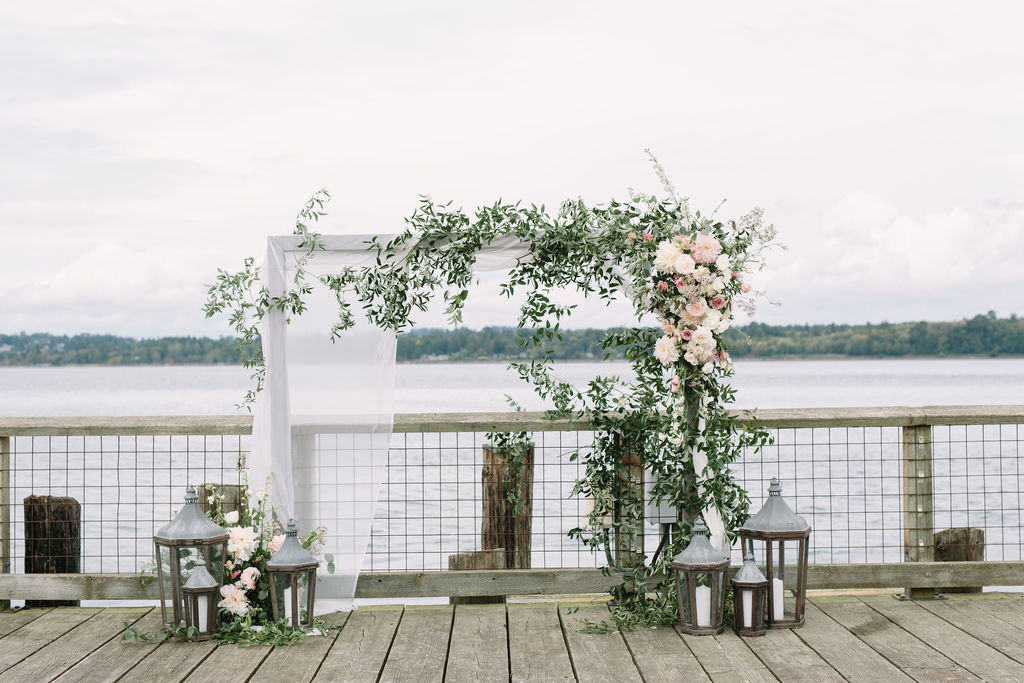 Sign us up for a lakefront wedding! This wedding at Semiahmoo Resort in Washington state is filled with elegant details and heartwarming ideas that I won’t blame you if you want a steal. Filled with delicate greenery garlands and marble touches, we loved how their wedding day looked modern and fresh yet neutral and elegant. Chelsea and Andrew are also dishing some of their advice to couples planning their own weddings now, so take note:

We love green for weddings (see this gorg Emerald green wedding in Bali for more!) 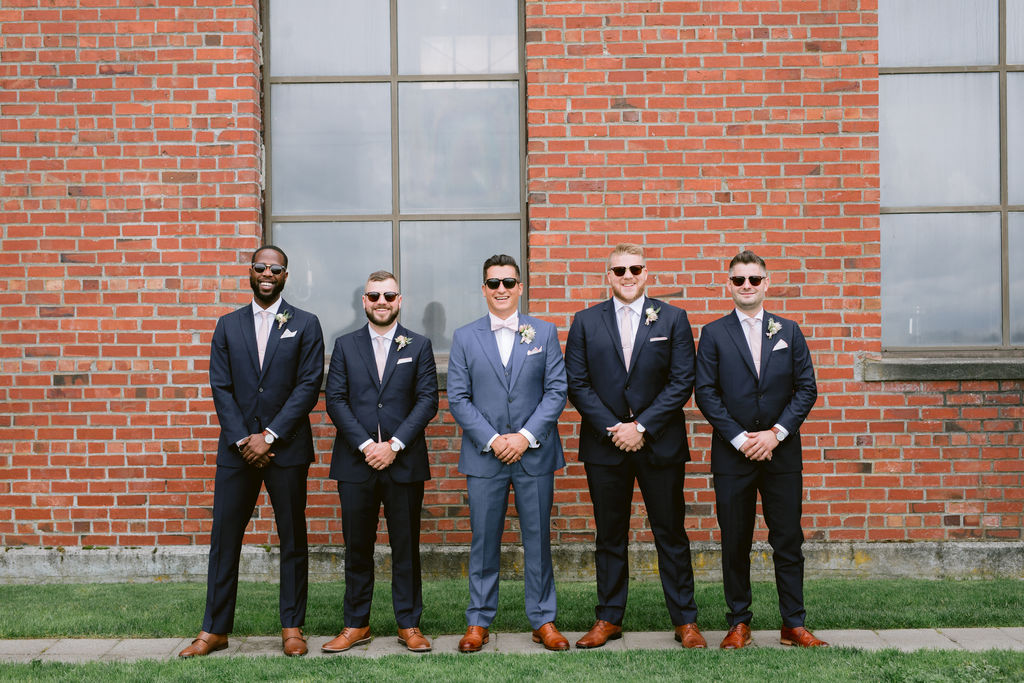 From Simply by Tamara Nicole: We did Full Planning, Design and Flowers for Chelsea and Andrew and are so happy with how this turned out.

Their venue, Semiahmoo Resort, is a dream. The beach, dock and the entire view on the waterfront were SO pretty for the guests and their stay that weekend.

As guests walked out to the ceremony, they were greeted with champagne as Bamboo Beats played some tunes. All of the signs, by Mint Afternoon, were on painted canvas in a muted grey color, matching the skies. One read “You are my Greatest Adventure”- as they LOVE to travel the world. Which also was carried out in the table names- which were places they have traveled to, with photos to match. 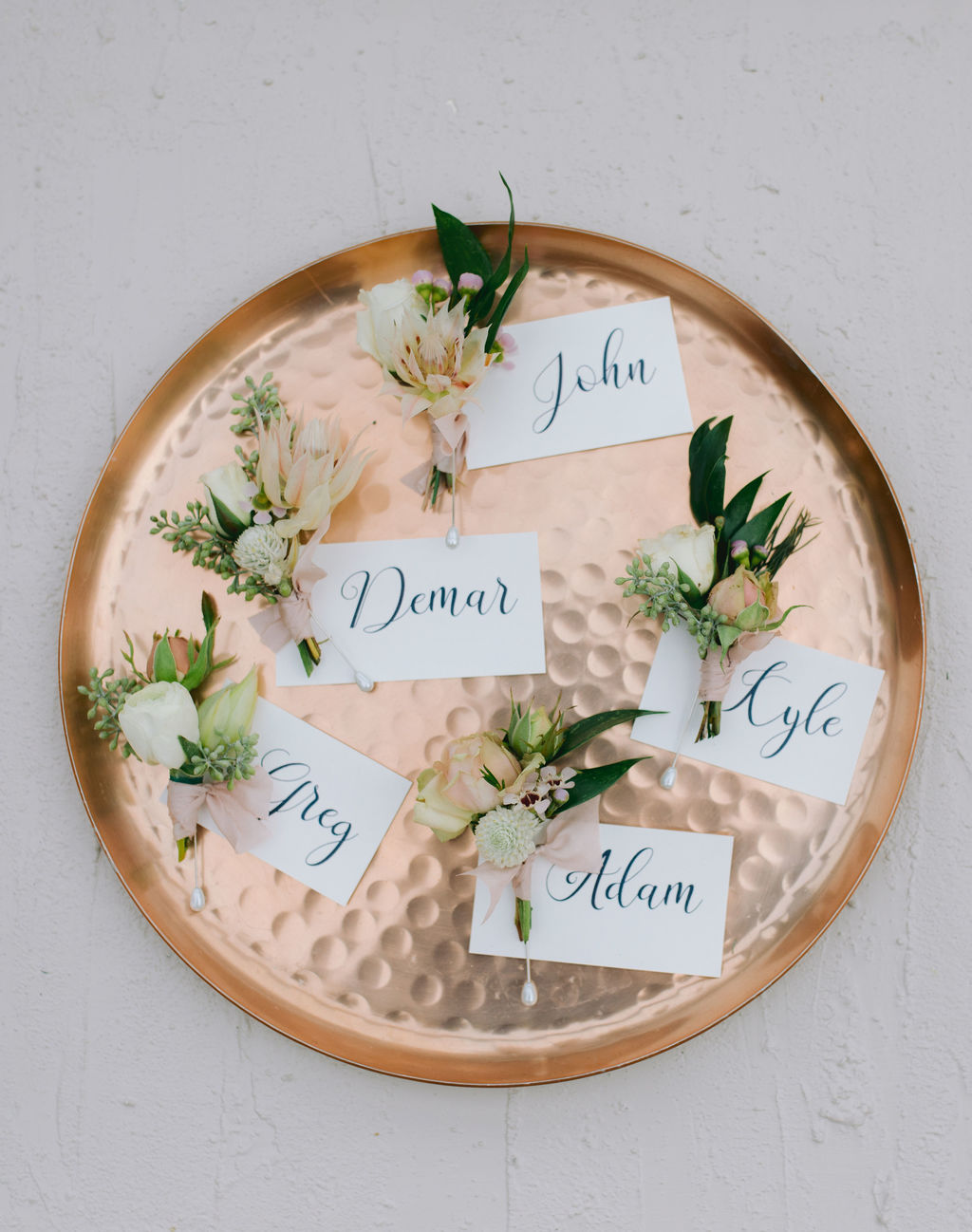 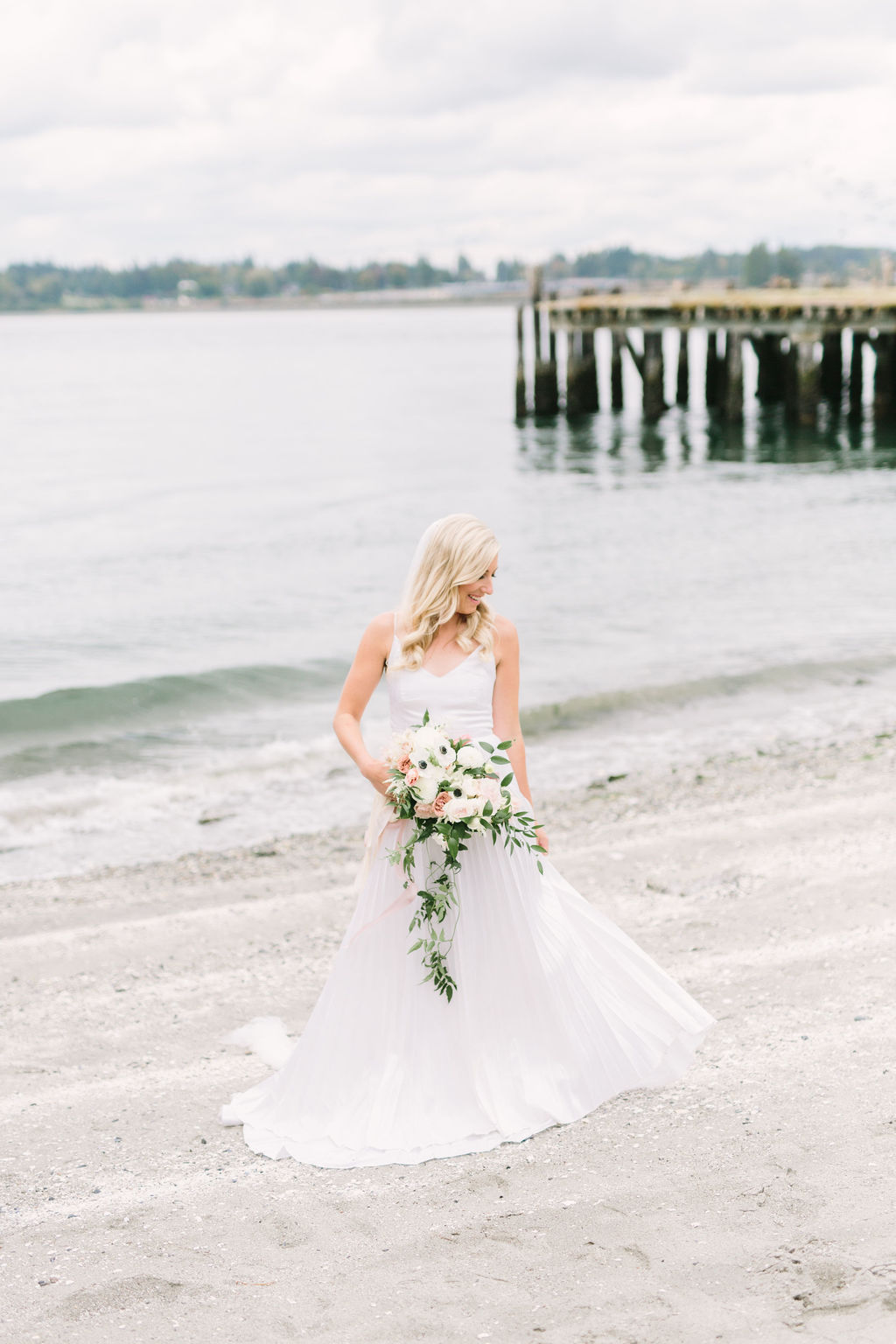 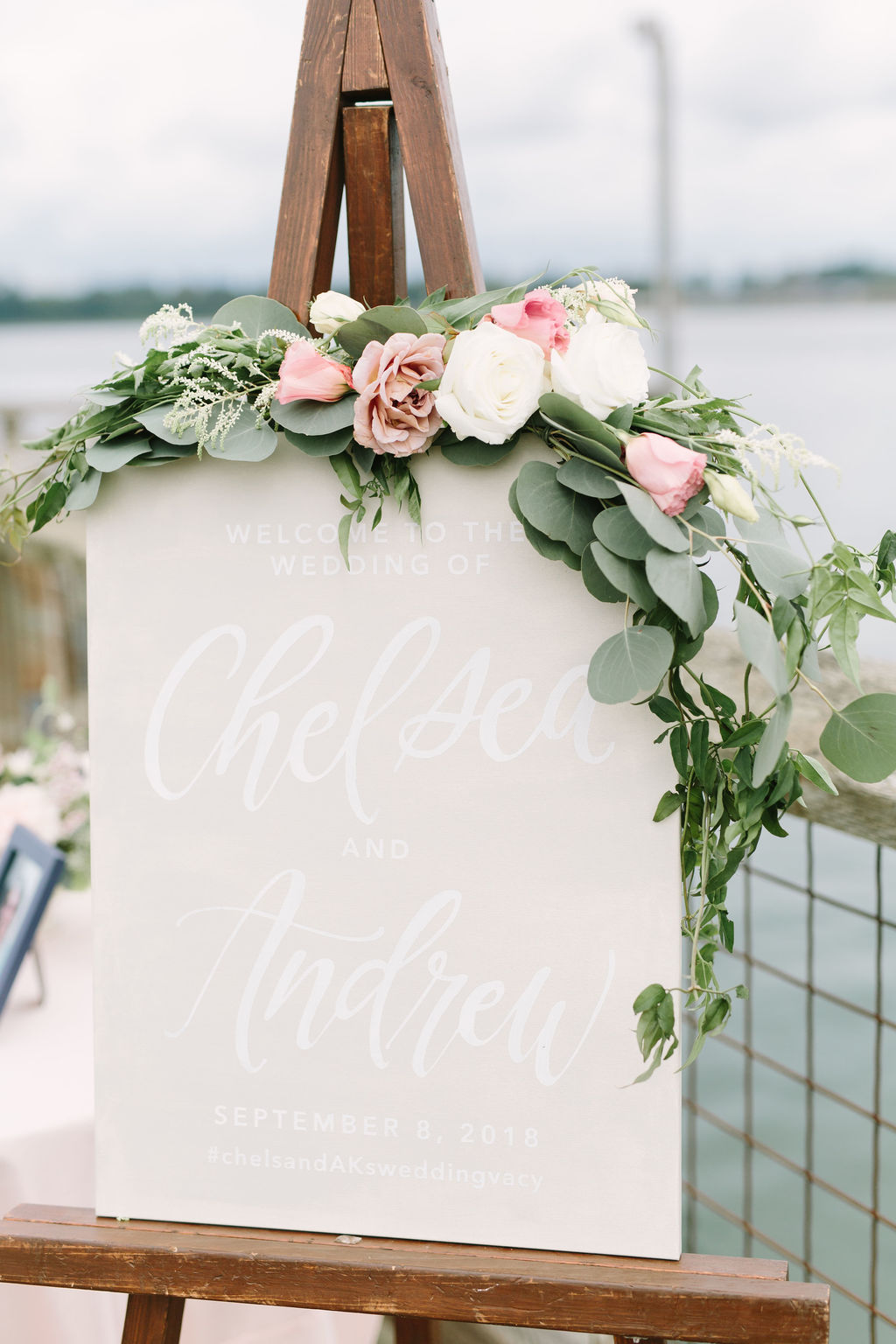 We printed (in navy to match) the family names on vellum and tied it in silk ribbon on the chairs for the first row. We draped their arch asymmetrically in chiffon, and one side of the arch with greenery and various blush, mauve and neutral blooms. Chelsea was walked down the aisle with her Mother and Brother, it was so sweet! After their sweet and tearful vows, and the kiss, one funny moment was as they walked back down the aisle, her veil caught on the dock!

For the guestbook, they had people add things to their “bucket list”. The escort cards were calligraphy names and table numbers hanging on their champagne glasses. For the Grand Entrance of the wedding party, they had a hilarious game! They had cutouts of the wedding party’s faces on each table. The MC (Andrew’s Brother in Law)- read some fun facts written by Chelsea and Andrew of the person, and people would guess who it was! It was so good! 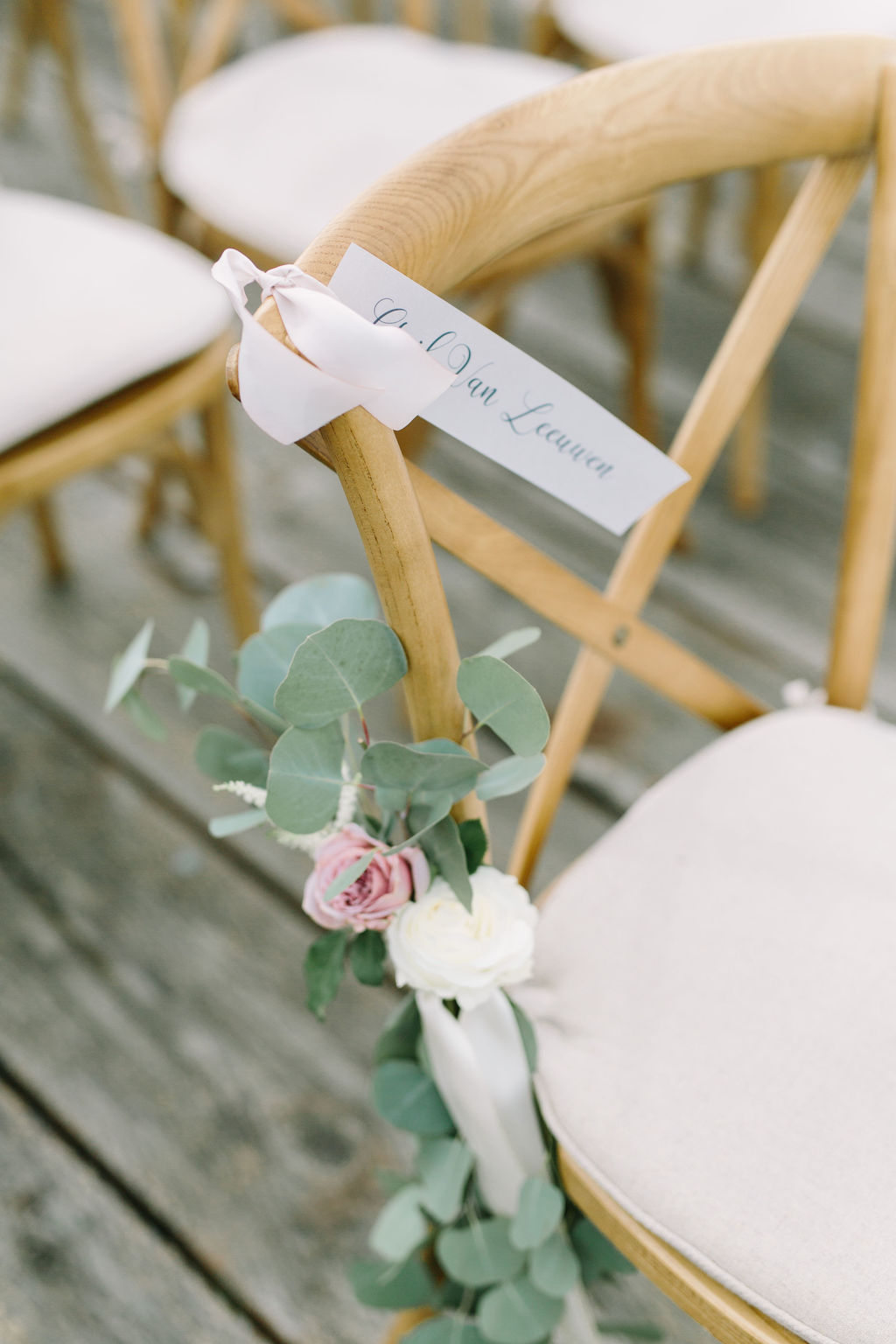 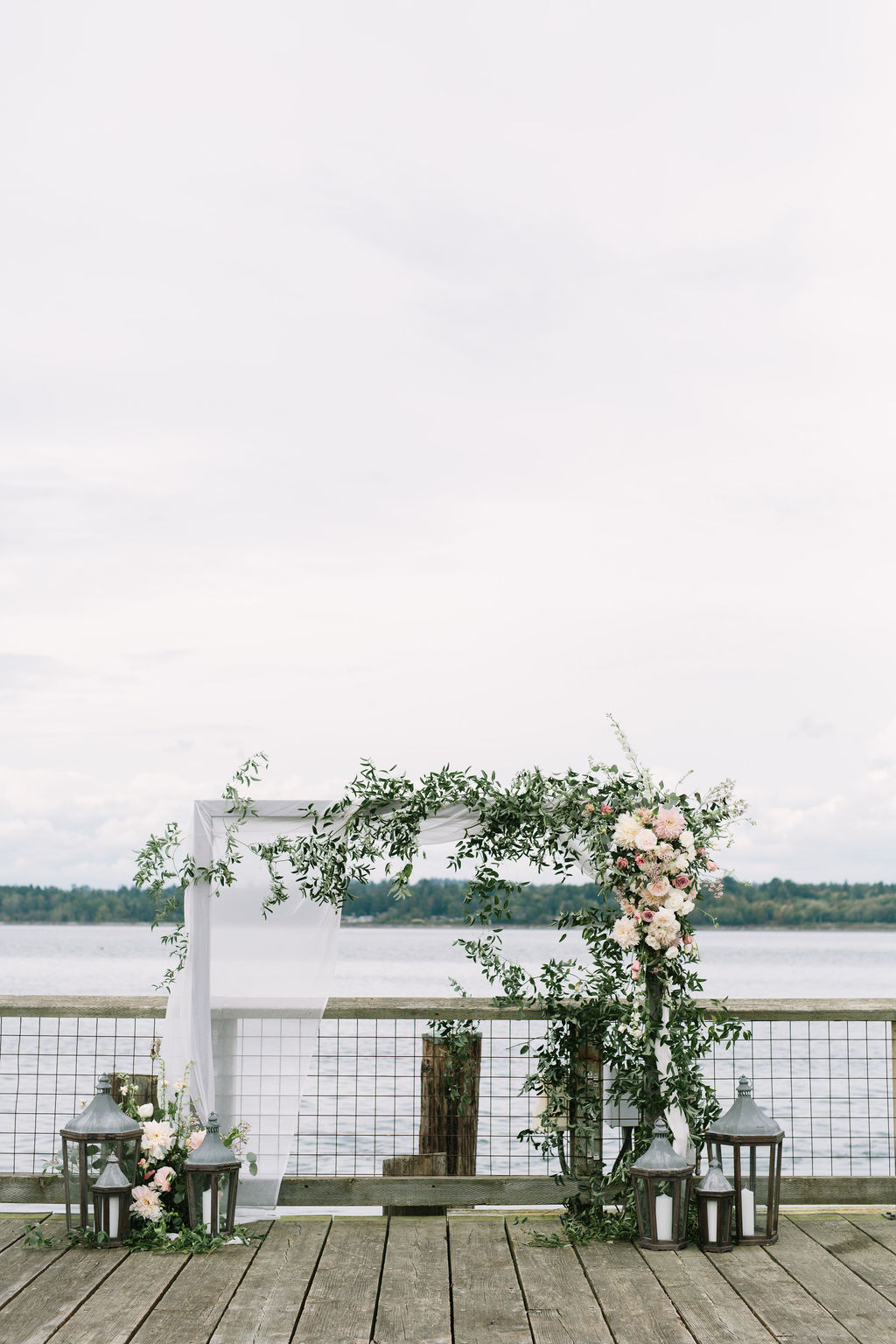 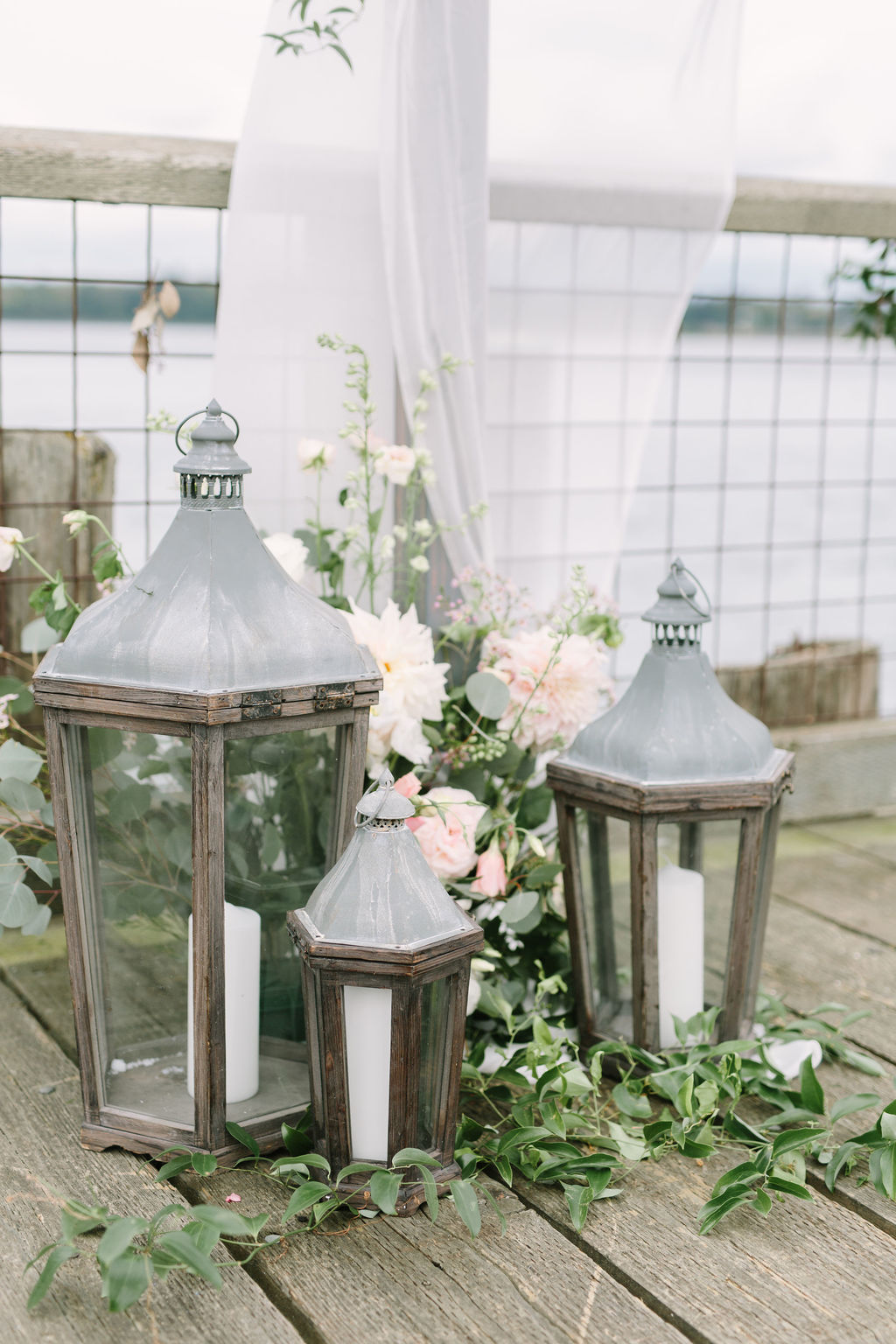 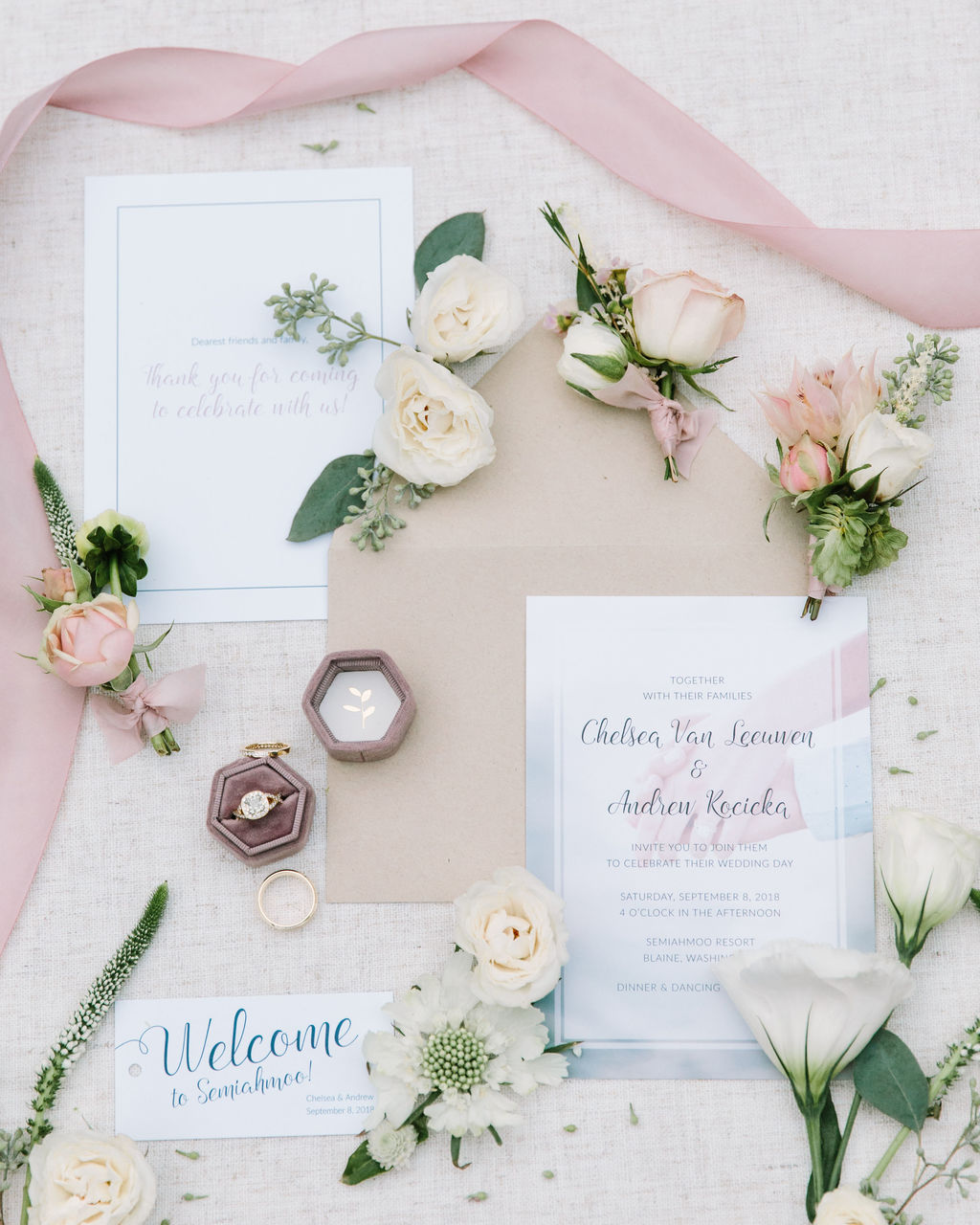 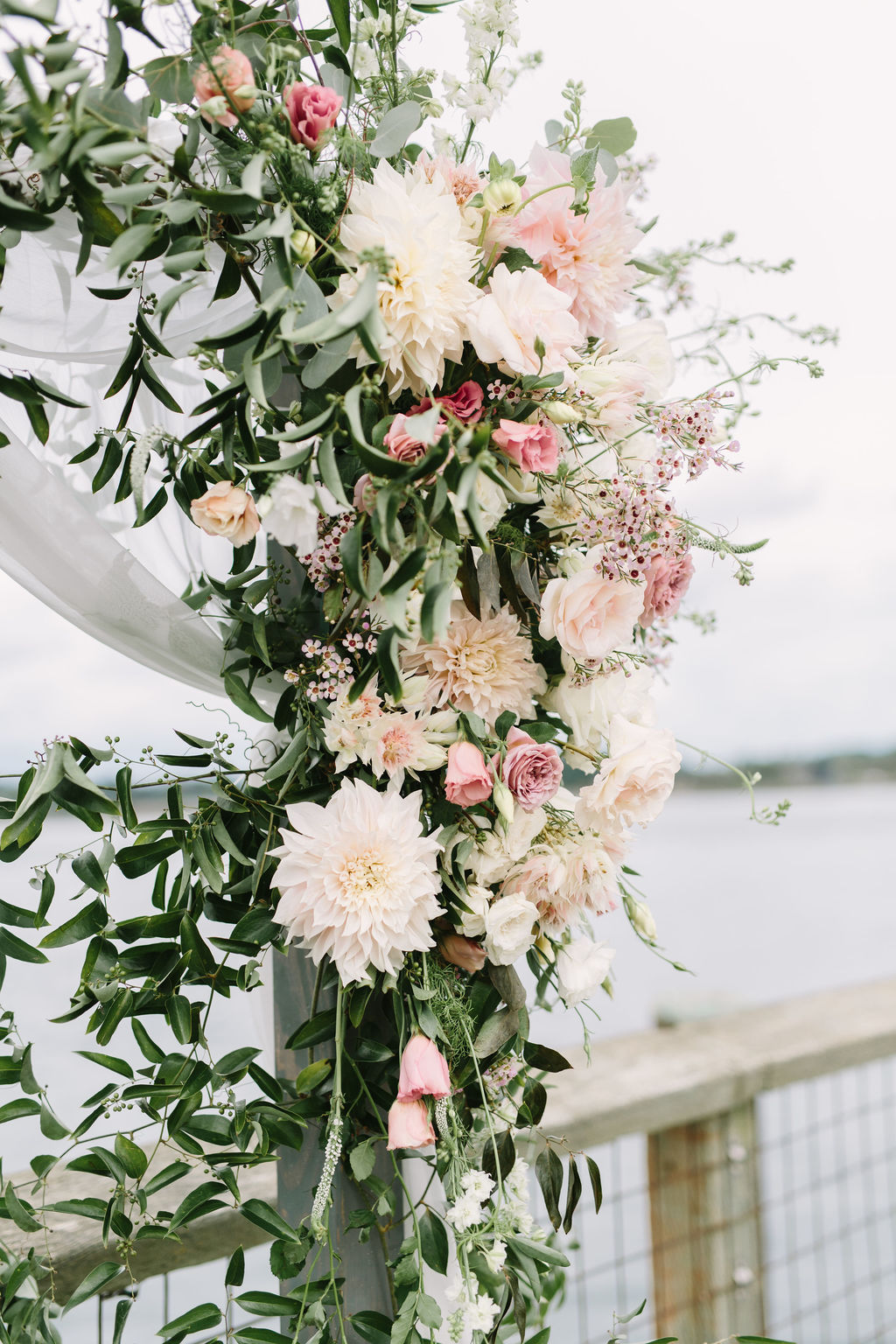 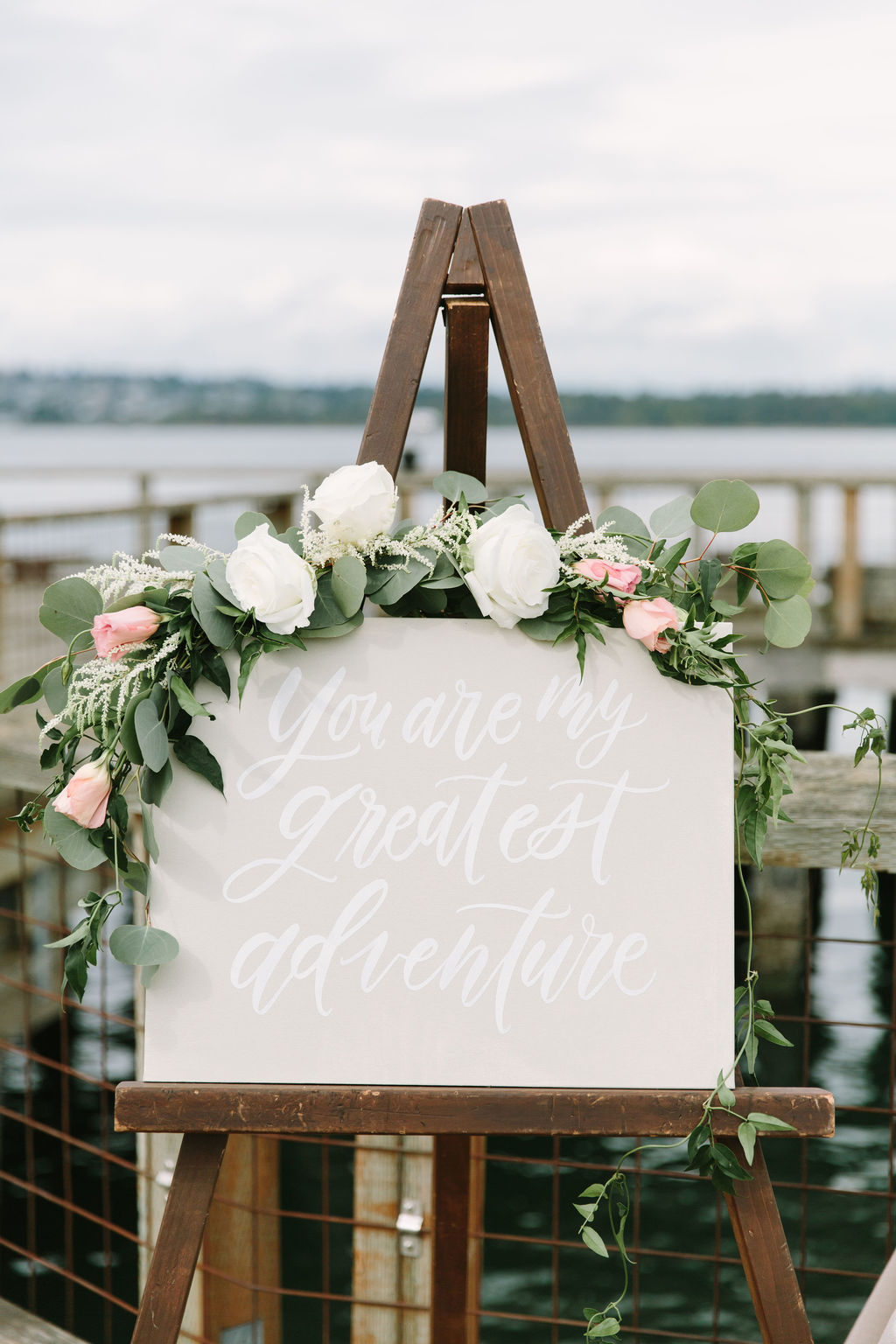 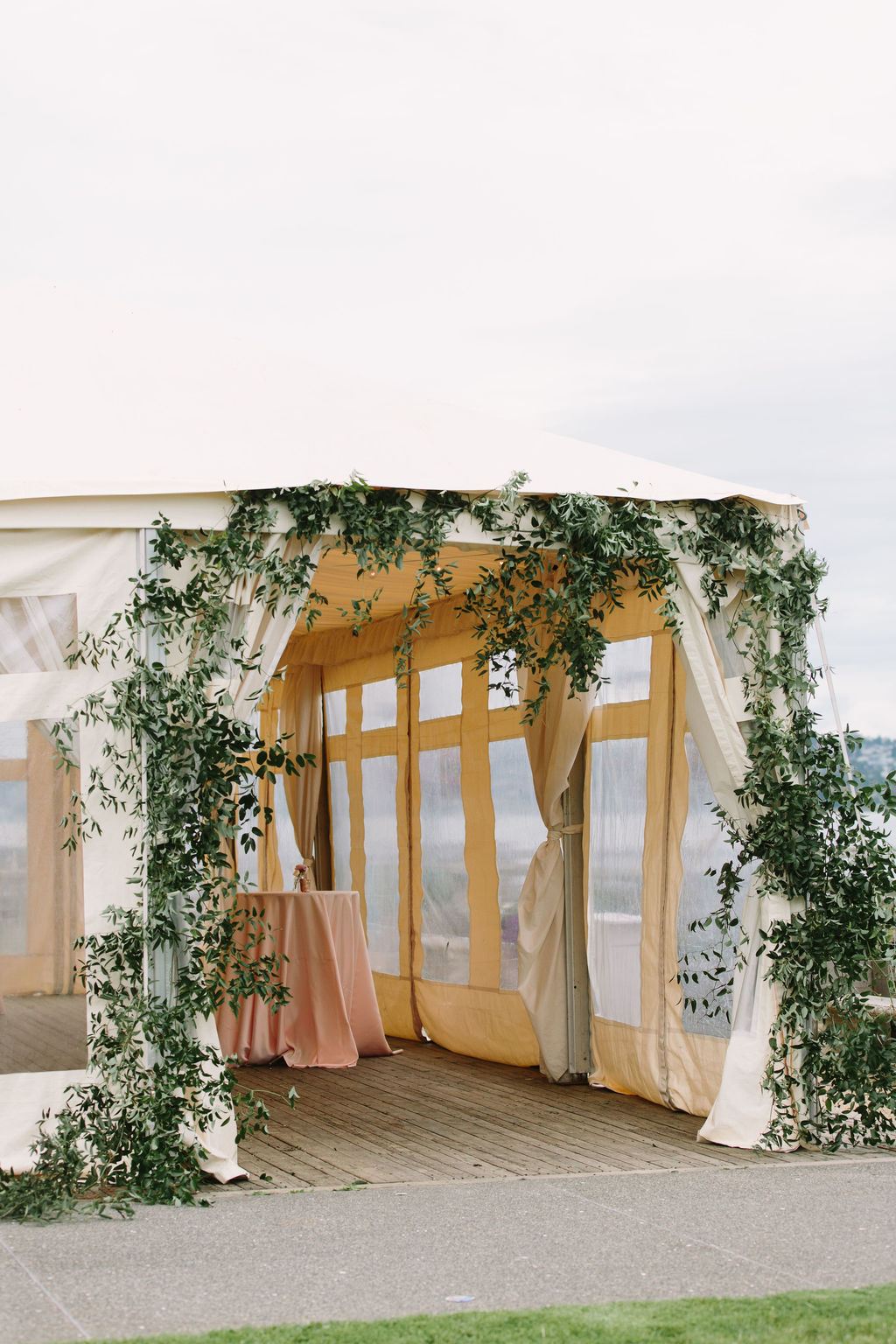 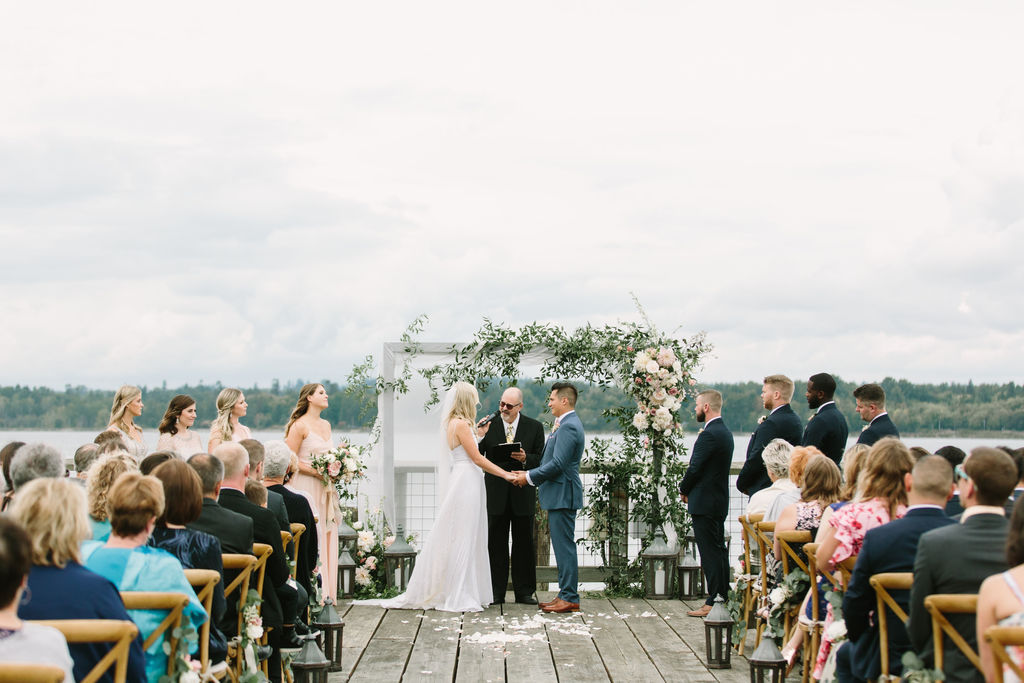 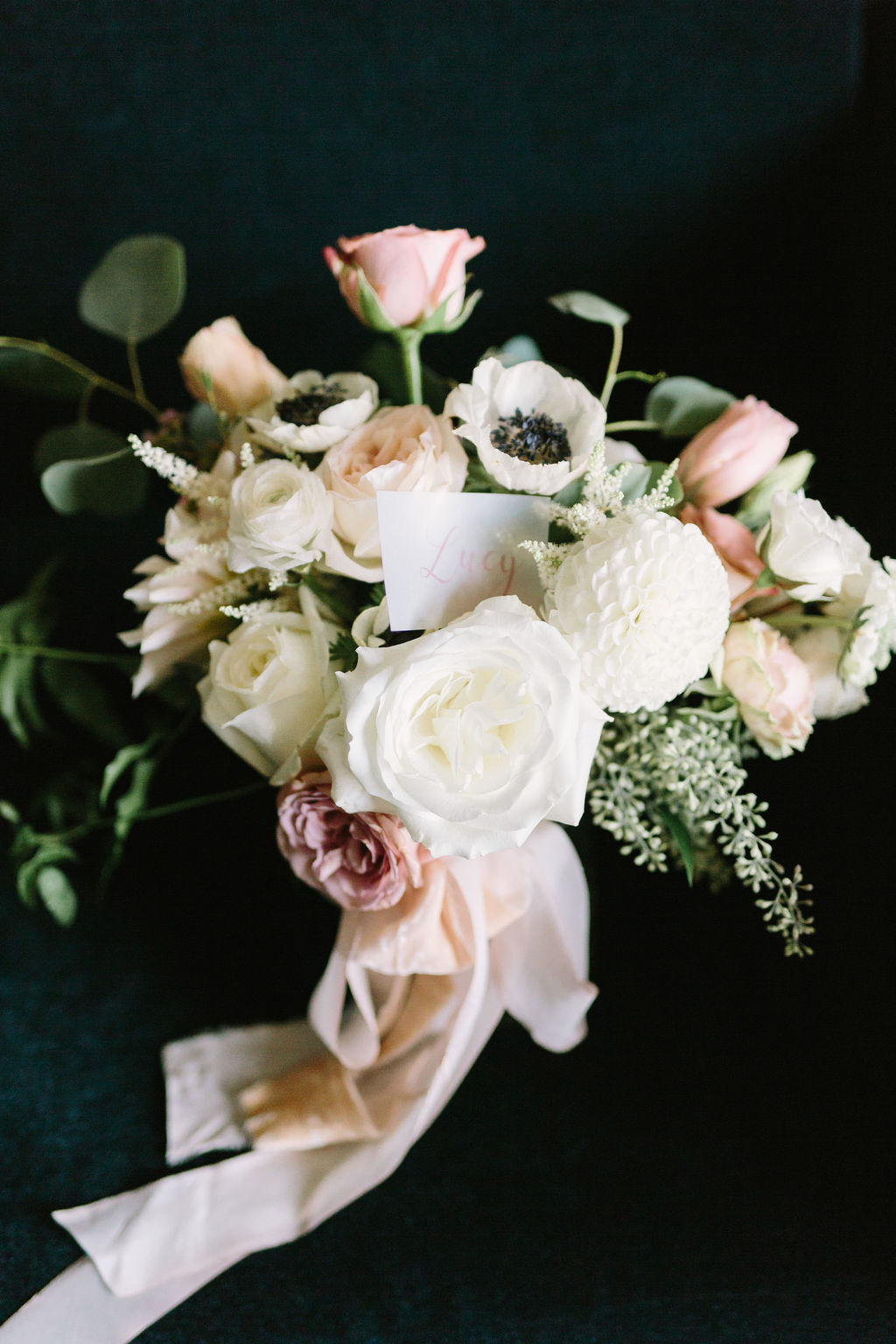 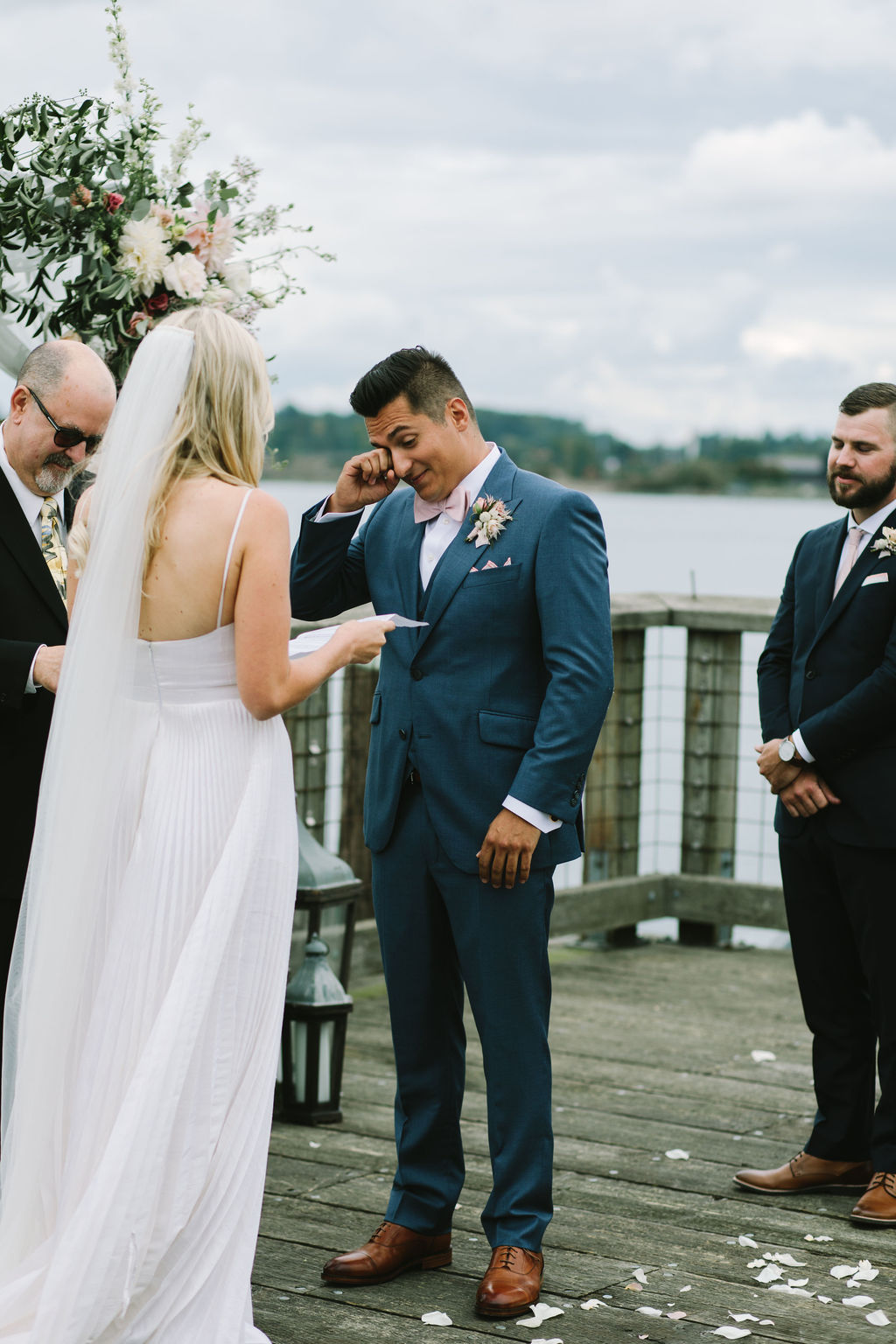 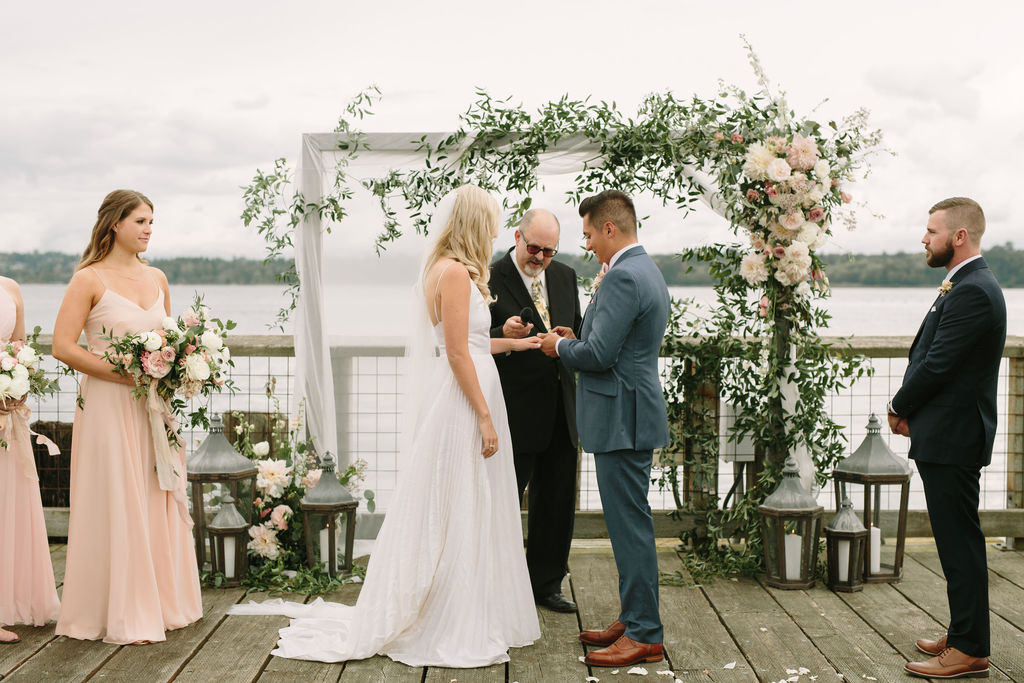 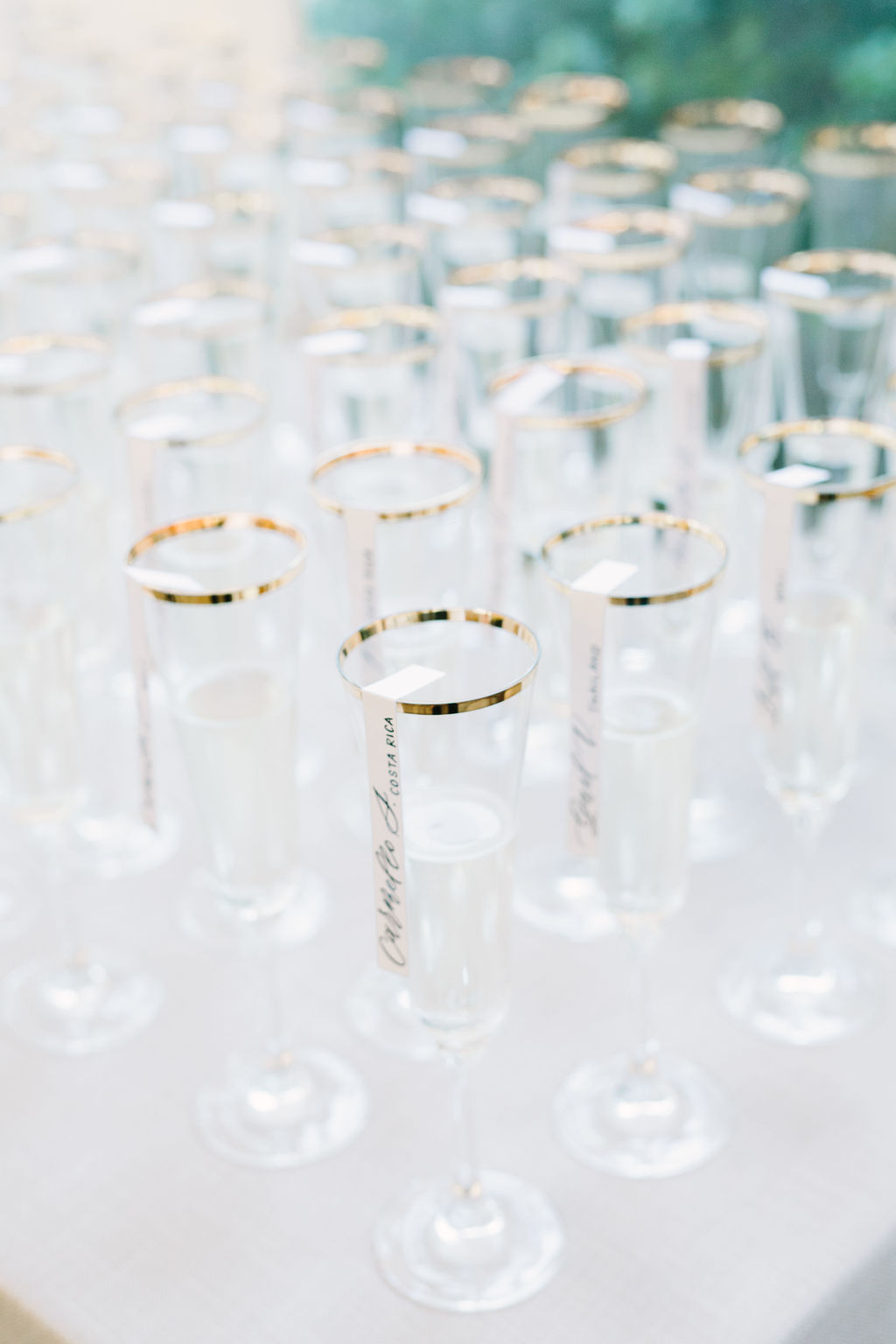 For the head table, we created a garden-esque installation and lined the tables with candles. We hung greenery at the entrance of the tent, as well as on the chandeliers. Lining the tables as well, with candles everywhere. At each place setting, we had rose gold flatware from Grand Event Rentals, and then marble chargers with blush napkins. We added calligraphy names on vellum to the menus from Minted for each guest.

The Dessert Table had some delicious cupcakes from Saltadena. After the dinner from Semiahmoo, they played a fun Scavenger Hunt where the Bride and Groom each picked their team, which brought out the competitiveness of the couple, it was so good! Then Andrew surprised Chelsea not only with a Groomsman dance (Backstreet Boys style!), but the SWEETEST song he sang to her. I don’t know if there was a dry eye in the tent. – Simply by Tamara Nicole 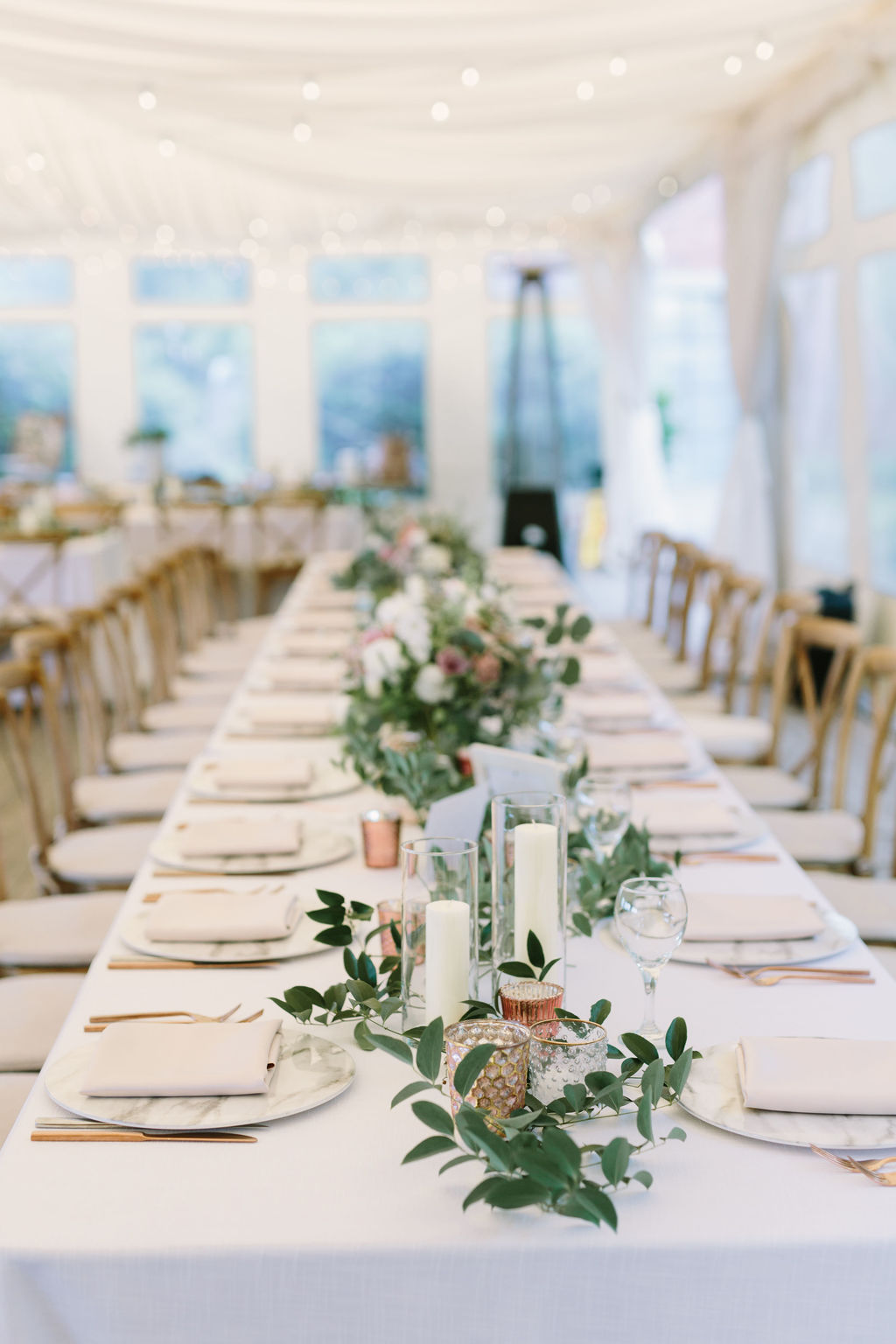 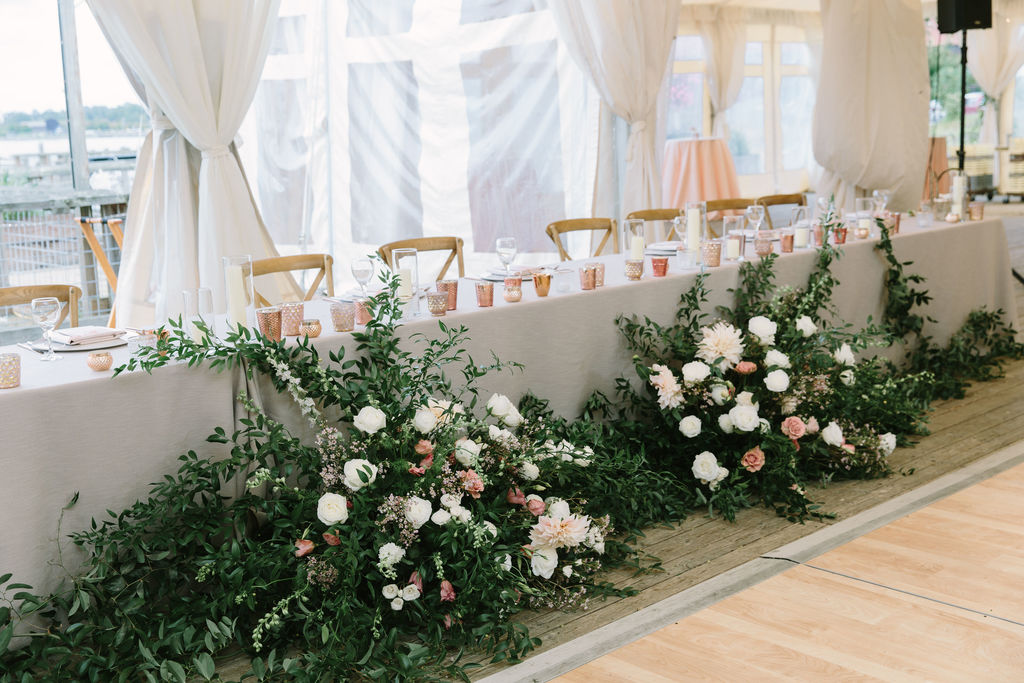 Chelsea:
1) seeing everyone both people love and care about in the same place at the same time to celebrate you! There is no other time in my life I have had this so it was amazing and so special to experience2) walking down the aisle and saying my vows, so surreal! Also the part I was the most nervous for but so special!3) When Andrew and his groomsmen busted out dancing to N Sync and then he sang such a beautiful song to me (ok I knew that part was coming BUT I didn’t know about the N Sync dance party- and still it was so sweet) 4) This isn’t technically during the wedding, but having so many people after (and still now 2 months later!) telling me how much they enjoyed our wedding and how fun it was, because for us we really wanted it to be fun for the guests, that was really important to us so it’s so nice to hear it from everyone that was there!

Andrew:
1. Has to be the reaction on everyone’s face when Chelsea was walking down the aisle. The music, decorations, weather, atmosphere, dress were just breathtaking and you could see how overwhelming it was to everyone including myself.
2. The garter and bouquet toss. Never have I seen such competitiveness from our closest friends from ones that knew each other to ones that just met. One of the groomsmen fell flat on his face while our friend Laura who caught the bouquet just put up her hand and caught Chelsea’s bomb with ease. 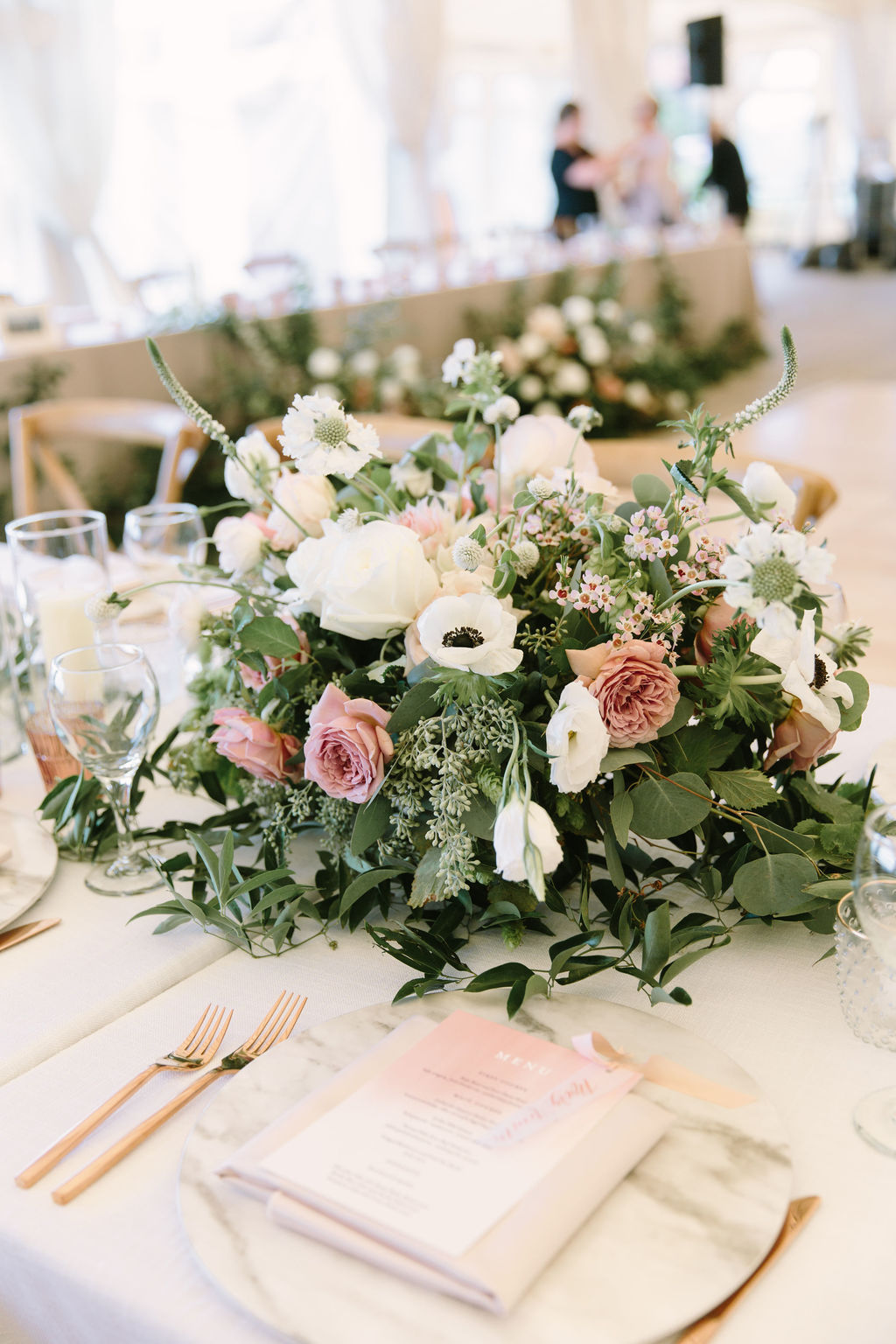 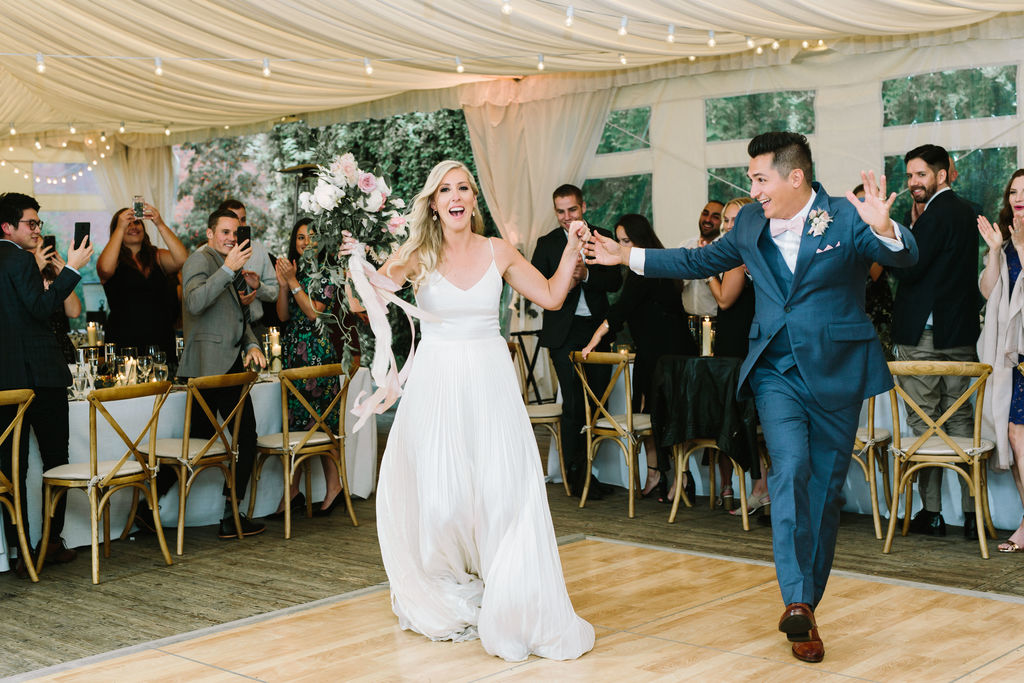 ADVICE TO BRIDES – ah such a good topic!

1. I still stand by my initial advice which was HIRE A PLANNER!
2. Don’t sweat the small stuff- seriously!! I get that it’s hard not to at the moment but these things really don’t matter in the long run. I remember getting so stressed out about things like how I didn’t want to have a Bridal Shower but my Mom was kind of forcing me to (and I’m glad she did because I would have regretted it if I didn’t), and my bachelorette party was stressful because so many girls couldn’t go (but then I ended up getting to have 2!) and then there was the “no kids” thing but it all worked out even better than I could have thought and I didn’t even notice any of the kids or babies so it’s really not worth stressing over!
3. Try to take the time to enjoy every single moment of that day because it goes by sooooo fast, it’s seriously like you blinked and it’s all over! I would suggest just trying to take it all in as much as you can.

Now THIS is How You Have a Classic Vineyard Wedding

Washington DC Wedding in with all the Personal Touches