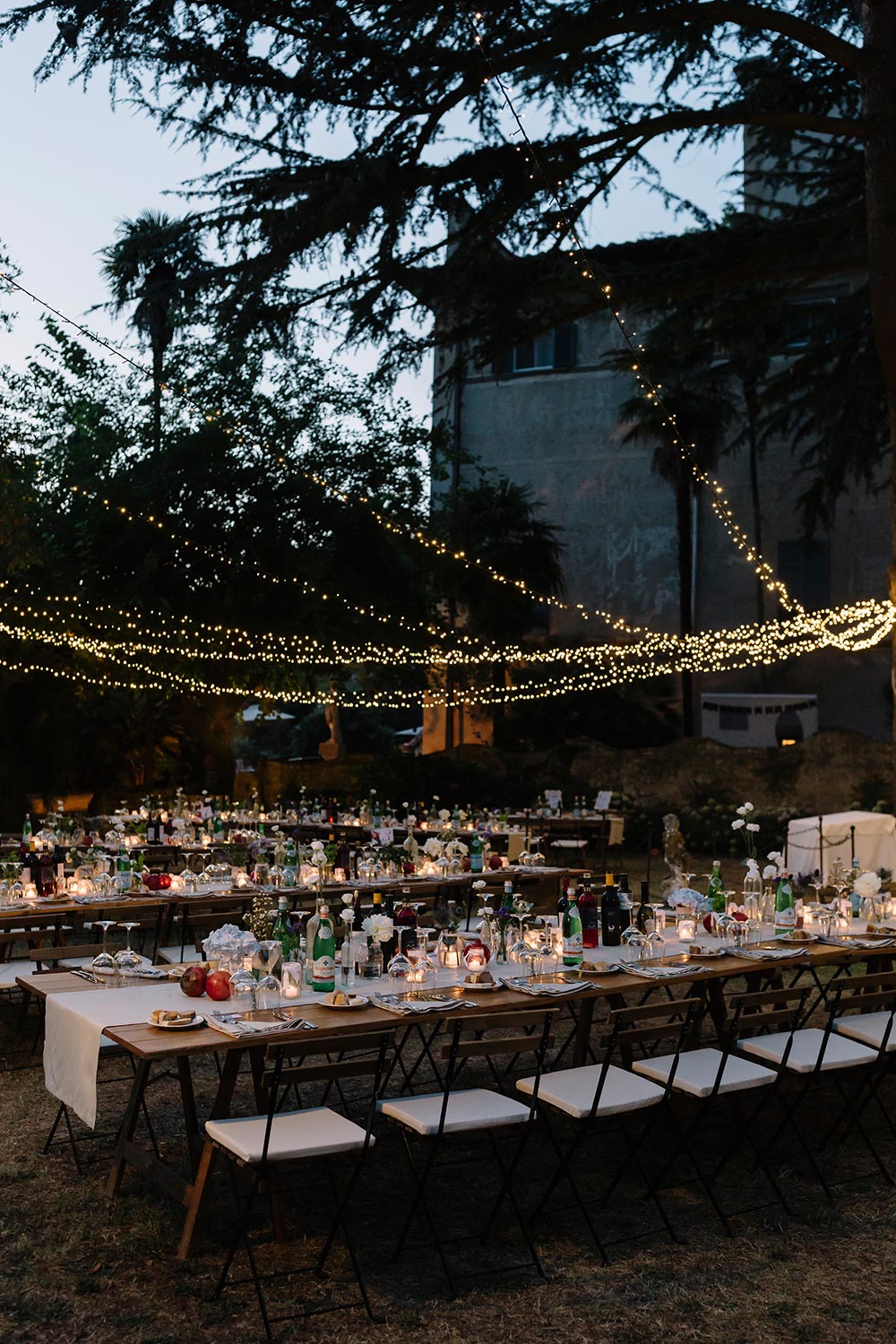 There’s just something about the Tuscan countryside that screams the phrase la dolce vita. And we’re pretty certain Eliza + Alex’s wedding is as sweet as they come. They wed beneath ruins and fairy lights, surrounded by the ones they hold most dear – which says a lot when you learn they come from Armenian, Moroccan, French and Australian backgrounds. Did we mention they call Paris home? So sit with us in amazement at their uber romantic celebration in the rolling Italian hills, and see just what happens when an artist gets married. 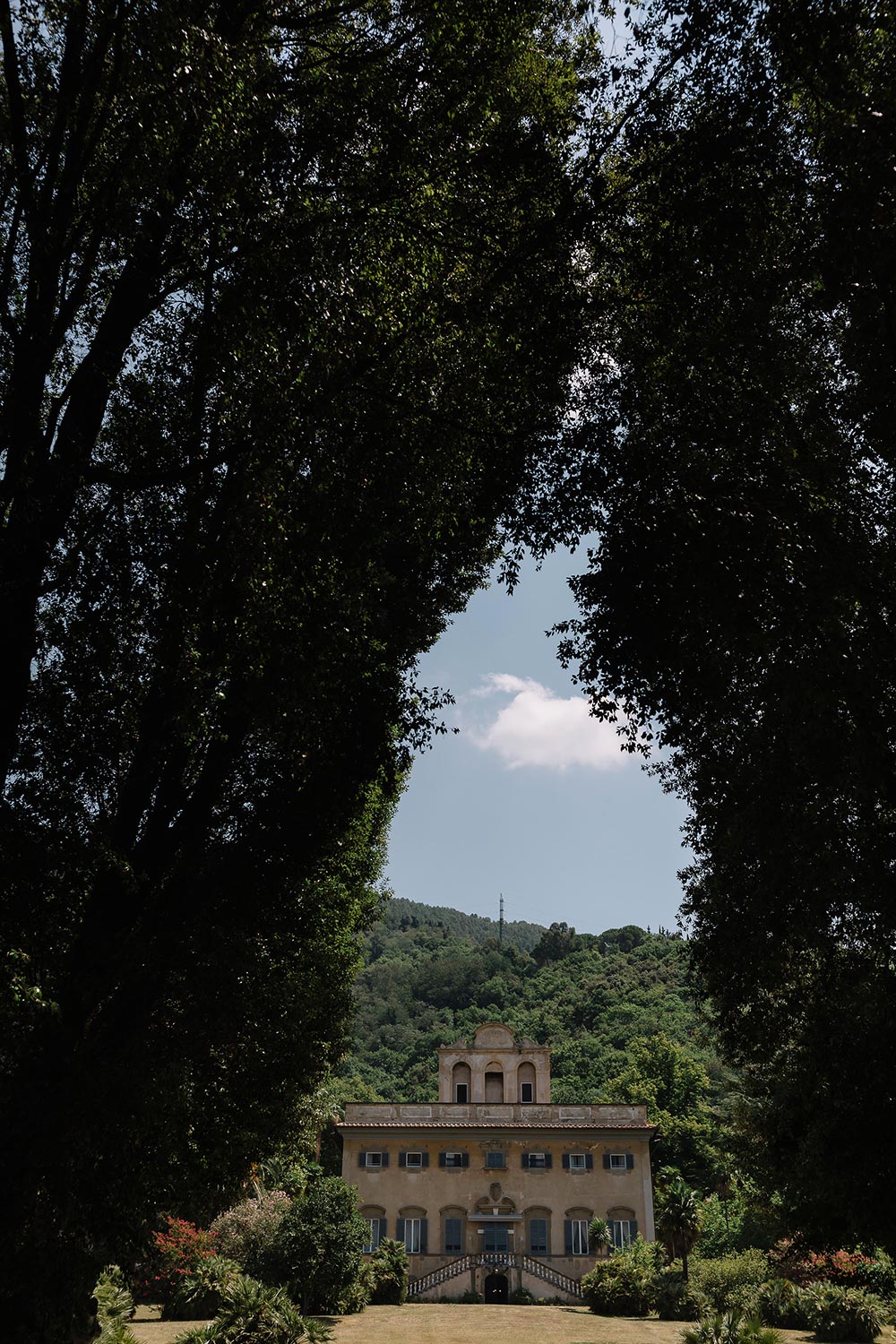 From the photographer, Katie Harmsworth: Eliza and Alex met in Paris. He is Armenian Morrocan French, and she is Australian. Eliza has lived in Paris for nearly 10 years. They share many loves including academic writing and research, art, sport, nature, travel, books, organic cuisine and hummus! Alex is a doctor of psychology, and Eliza is an art therapist, artist actress, director and designer. They met in 2013 and married in 2017. When they first met they were friends and love grew. Alex courted Eliza in a traditional manner (movies and dinners), but the first kiss did not come until 6 weeks after their first date. 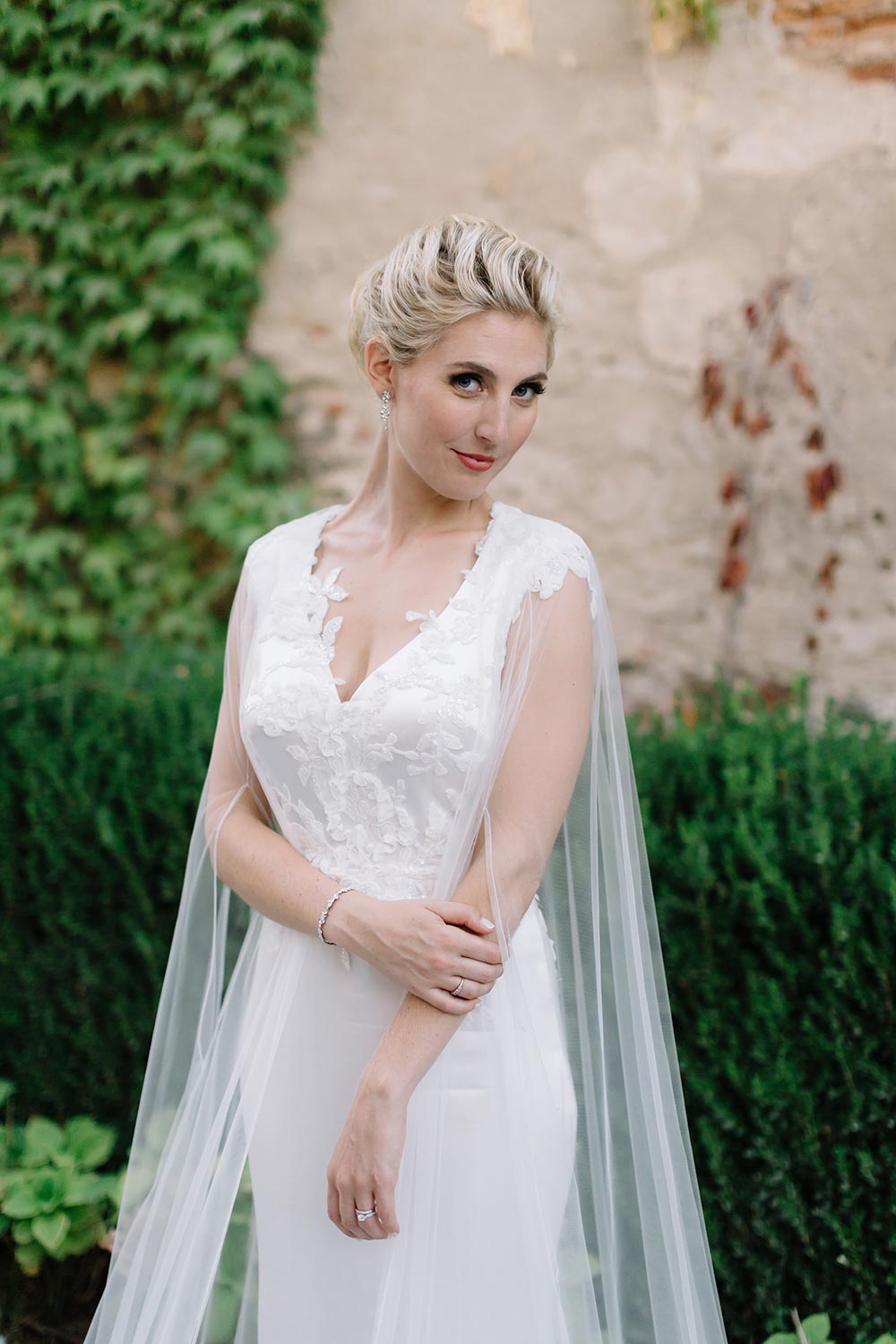 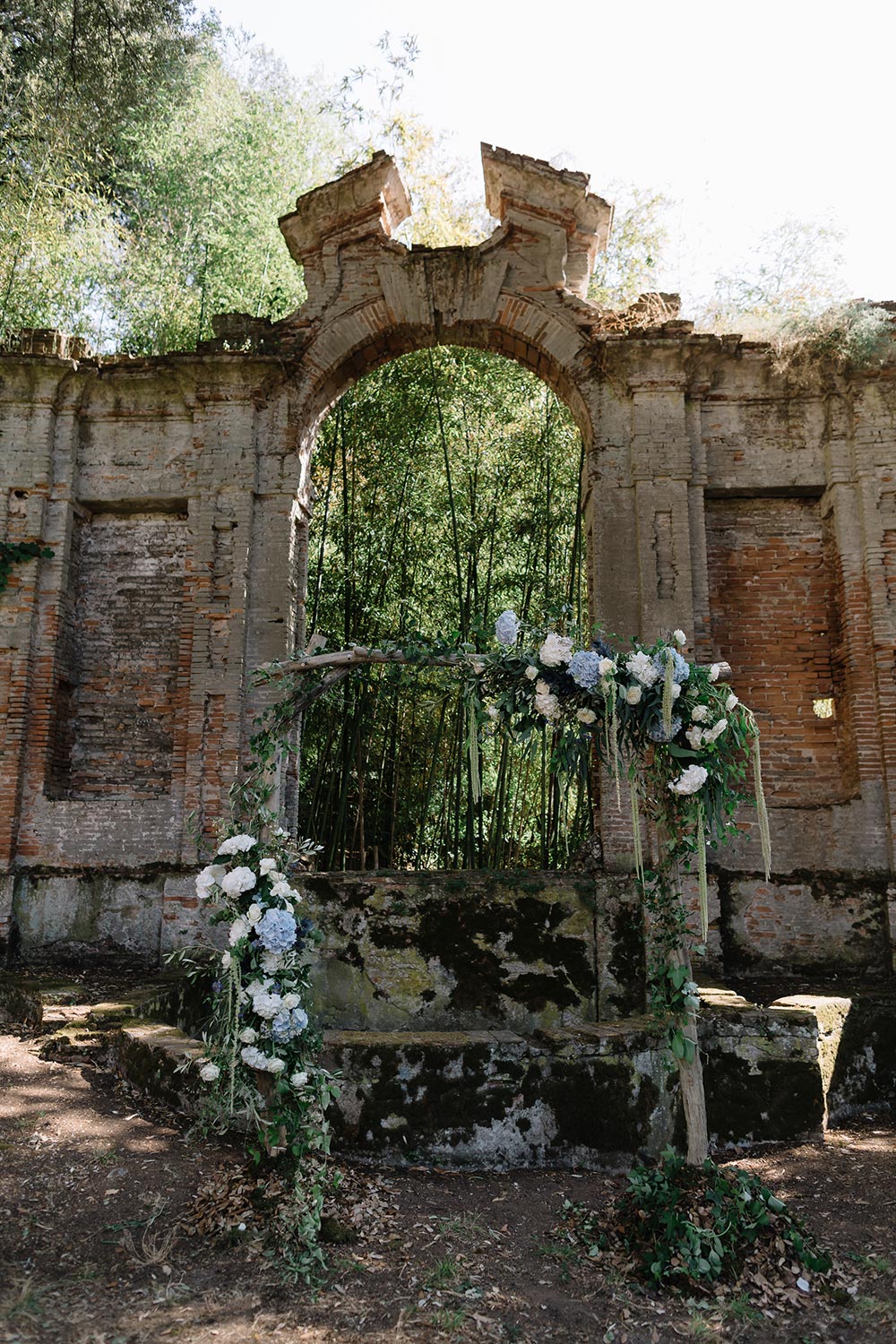 Eliza knew she would marry Alex the night of their first kiss in an Irish pub in Paris. Alex, a true romantic, had planned to kiss Eliza for the first time, the following day on a romantic walk in the Butte Chaumont Gardens Paris but the kiss was destined for that precious evening. Alex always said it was a sign from God that Eliza was the one for him. When they were dating, she brought organic homemade hummus to a dinner (Alex has an unexplained passion for this dish). 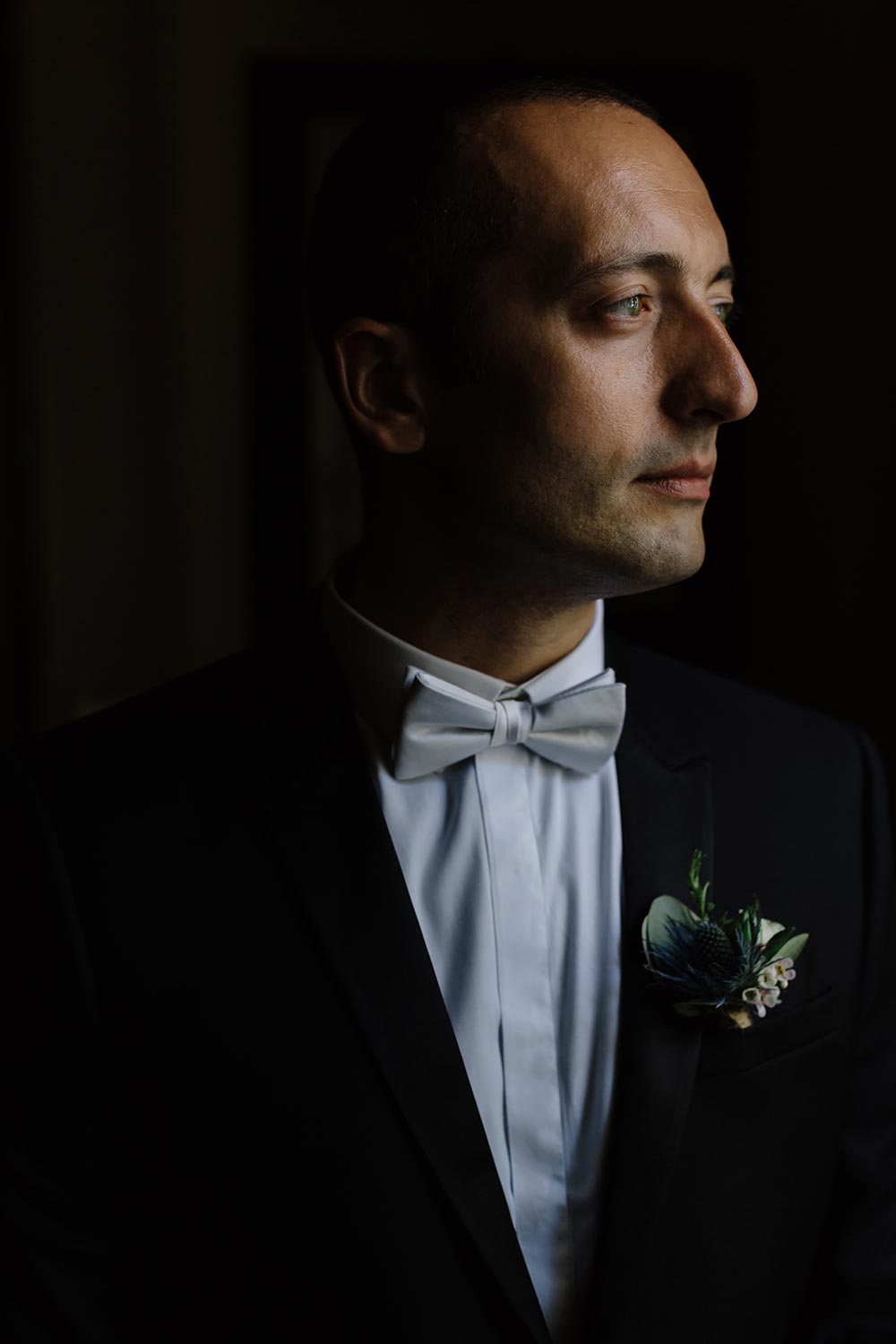 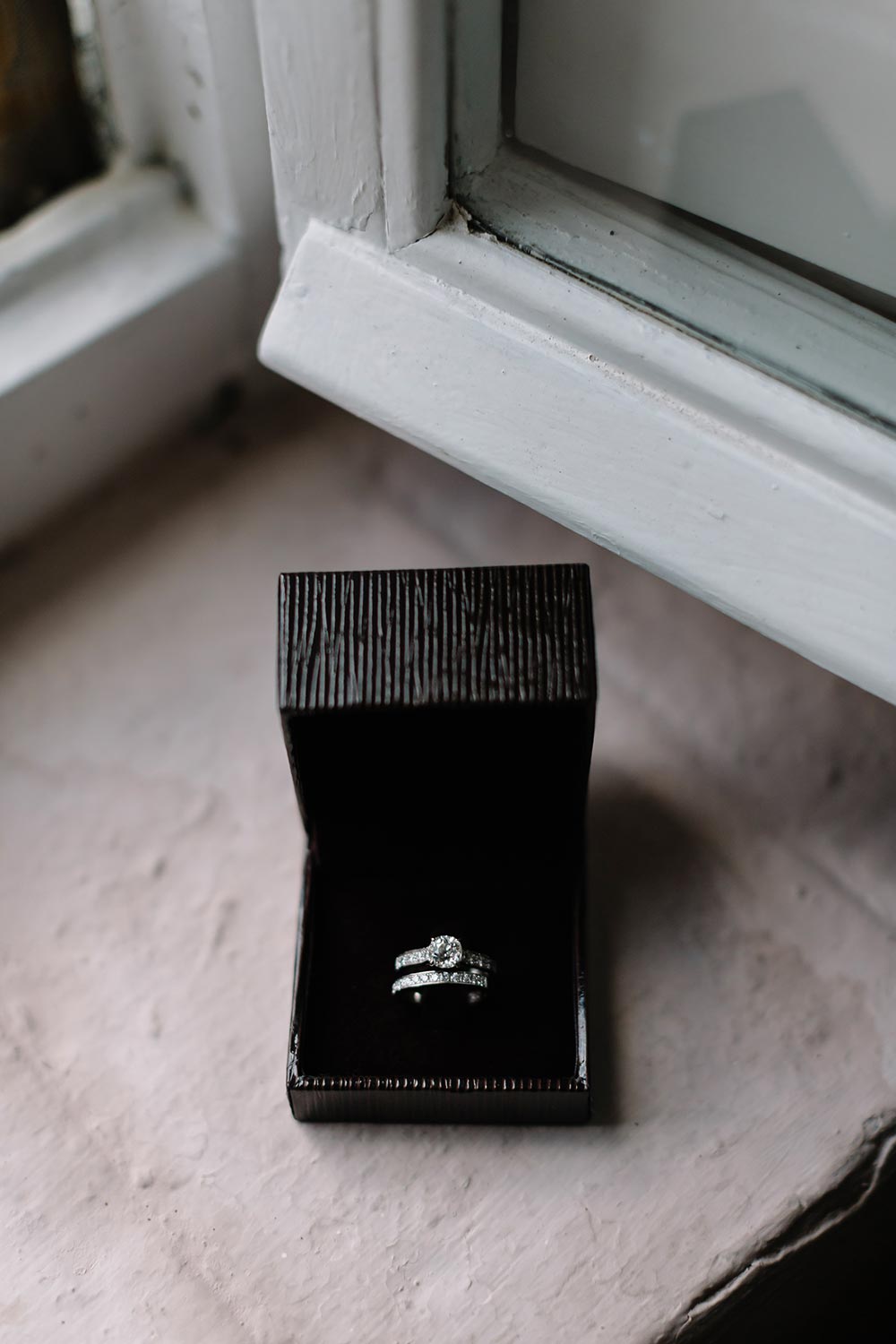 Alex proposed to Eliza in a fairytale way. He took her to Tuscany on a surprise trip where he drove her through Tuscany, visiting villages and staying in beautiful Tuscan villas for 10 days until on the final day, on top of the Guinigi Tower in Lucca, Alex popped the question. 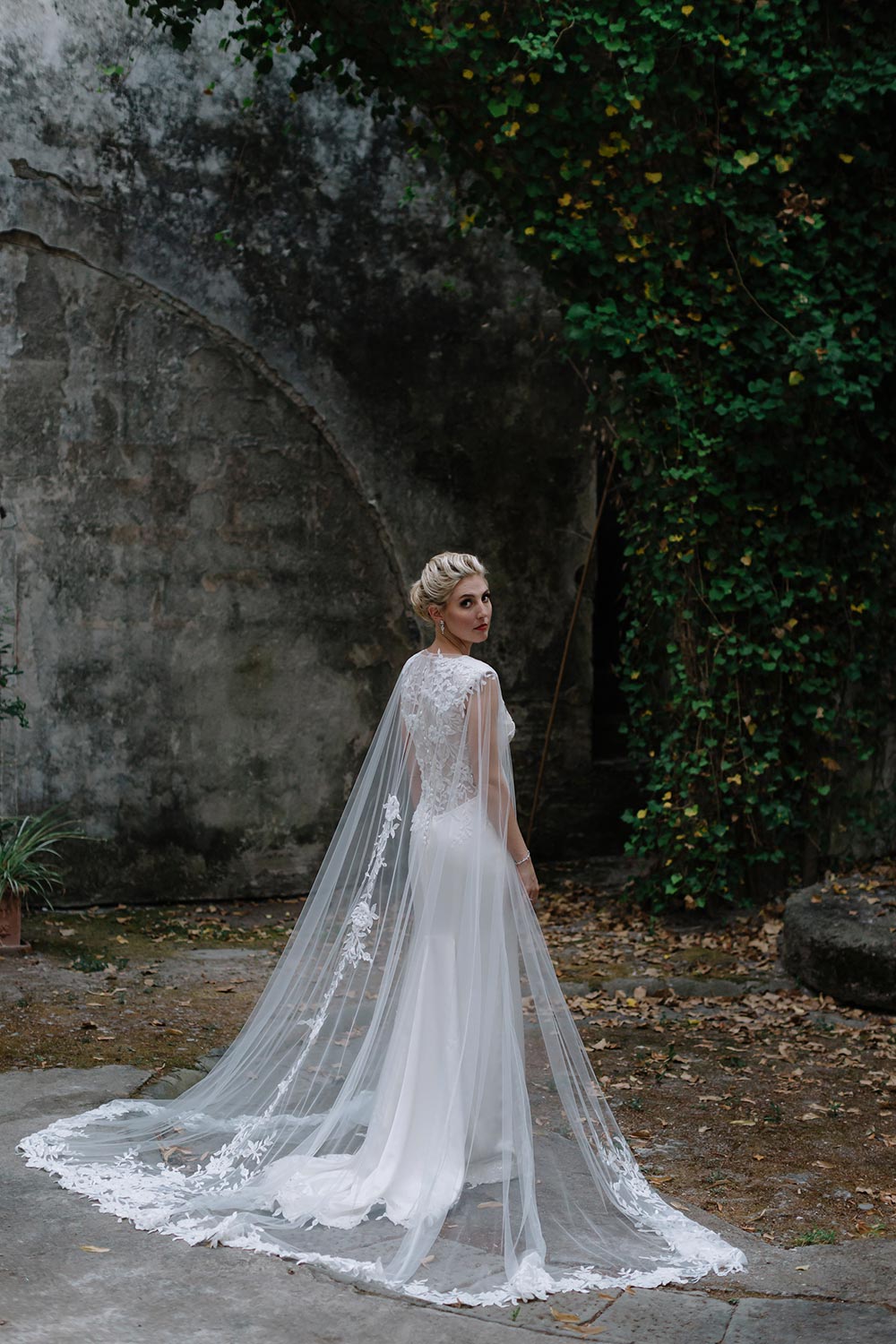 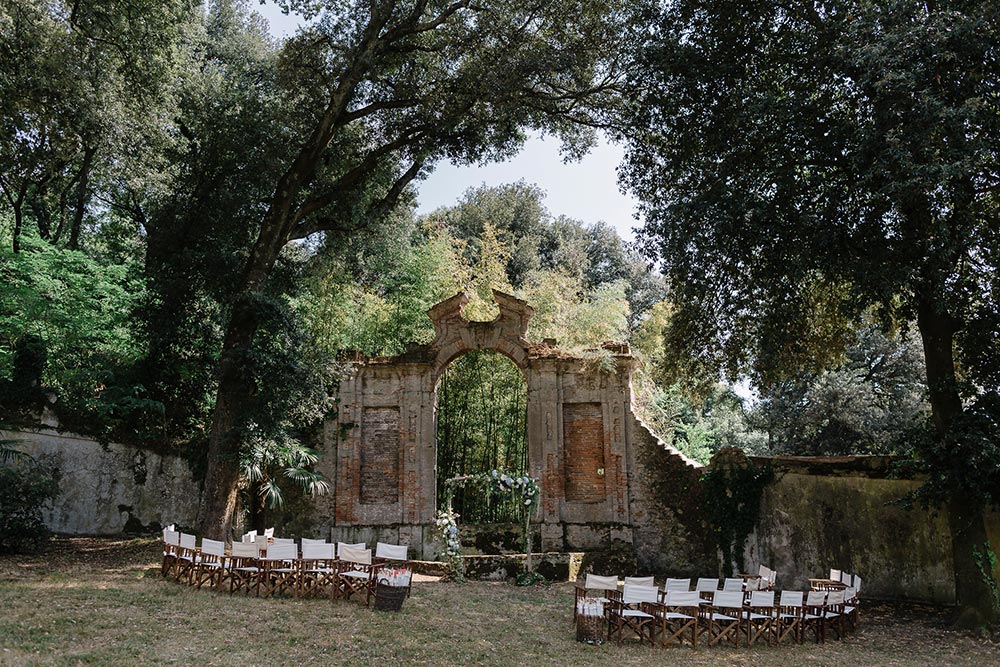 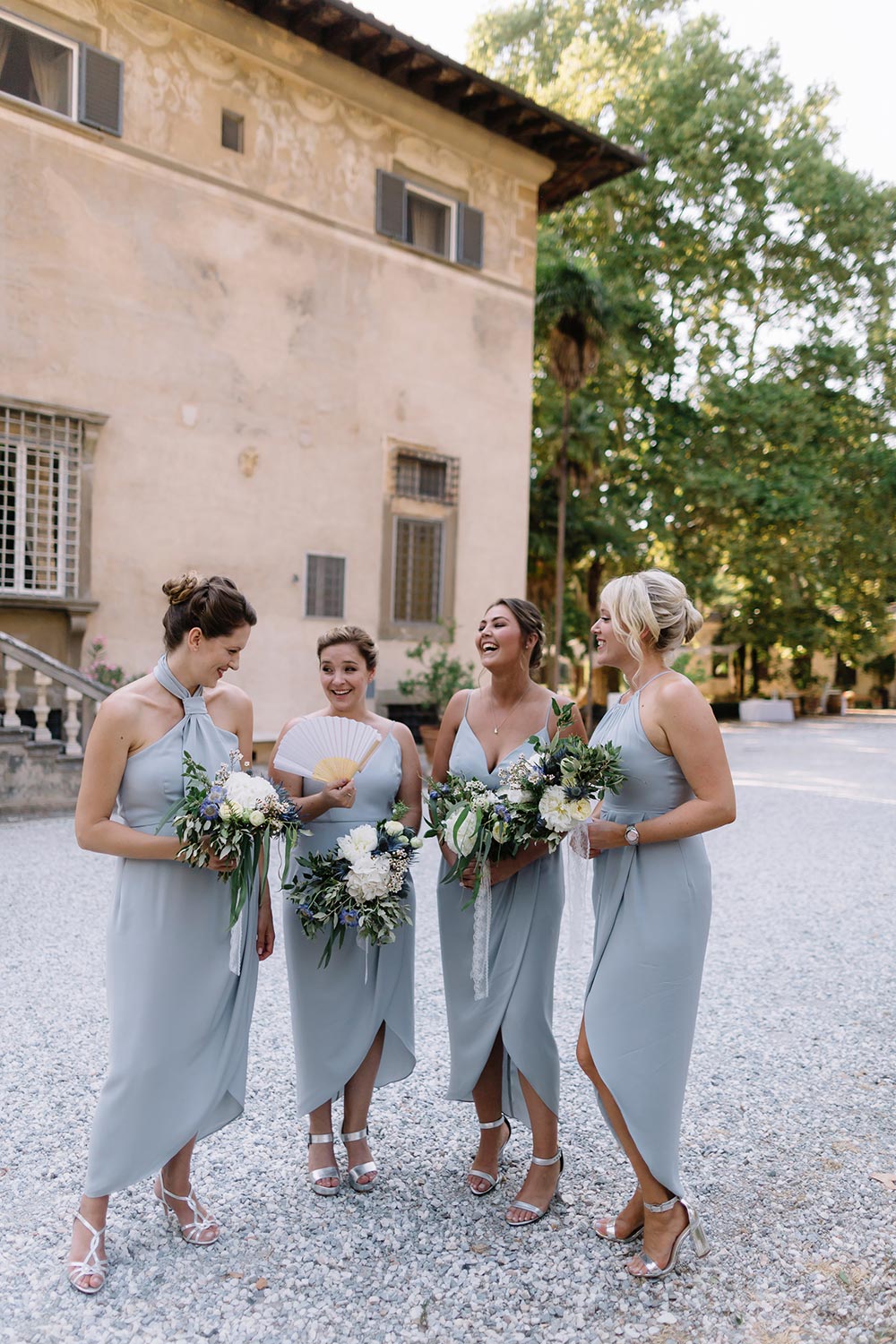 They got officially married in Paris as is law in France before going to Italy a week later for the spiritual ceremony. The marriage took place in Villa di Corliano, where they had had lunch of the day of their engagement. A very special place close to their hearts. 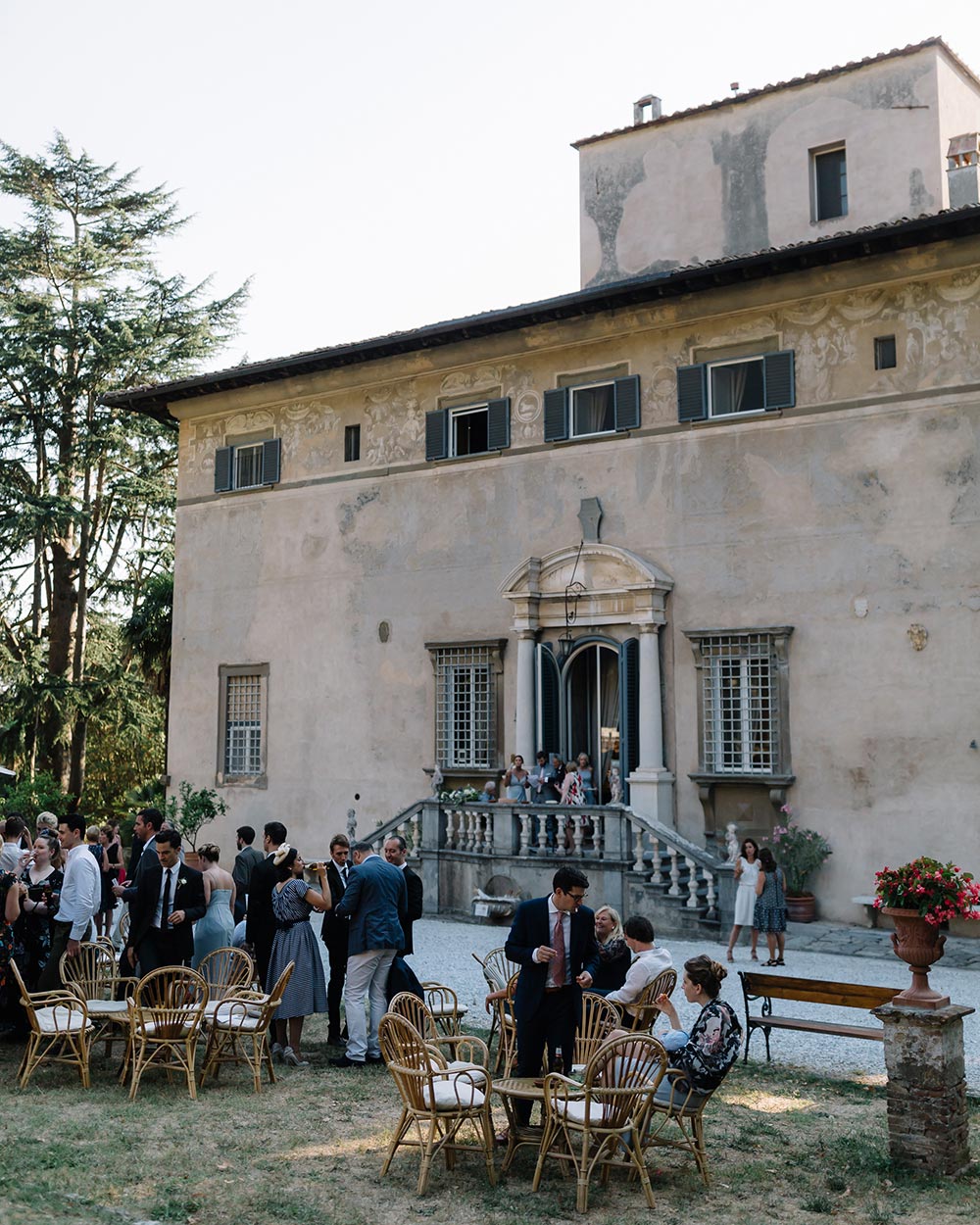 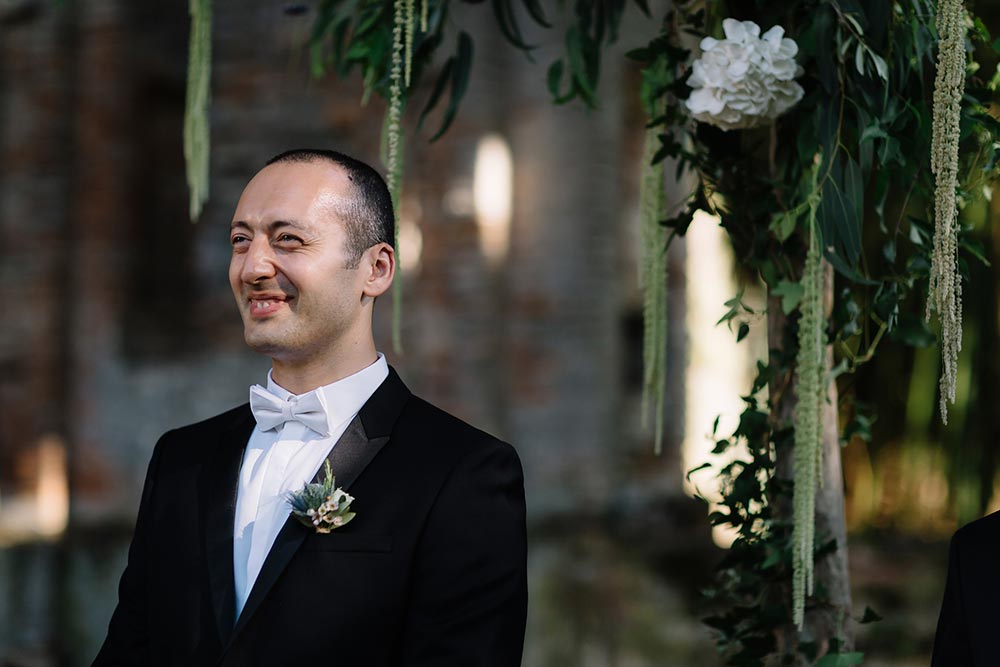 As an artist herself, Eliza and Alex made sure all the design elements were in harmony with each other. Taking color inspiration from the natural elements of Tuscany (olive and eucalyptus leaf, the green fresh colors of the surrounding gardens, etc) as well as hints from the colors in the original 15th century villa, Eliza and Alex created their design. The blue of the bridesmaids dresses and accents in all the bouquets and florals from Lilla Floral Design matched the blue shutters of the villa, and the organic greens corresponded with the landscape. Their mood was natural and organic – even Eliza’s soft makeup and loose updo from Silvia Gerzeli fit the theme! 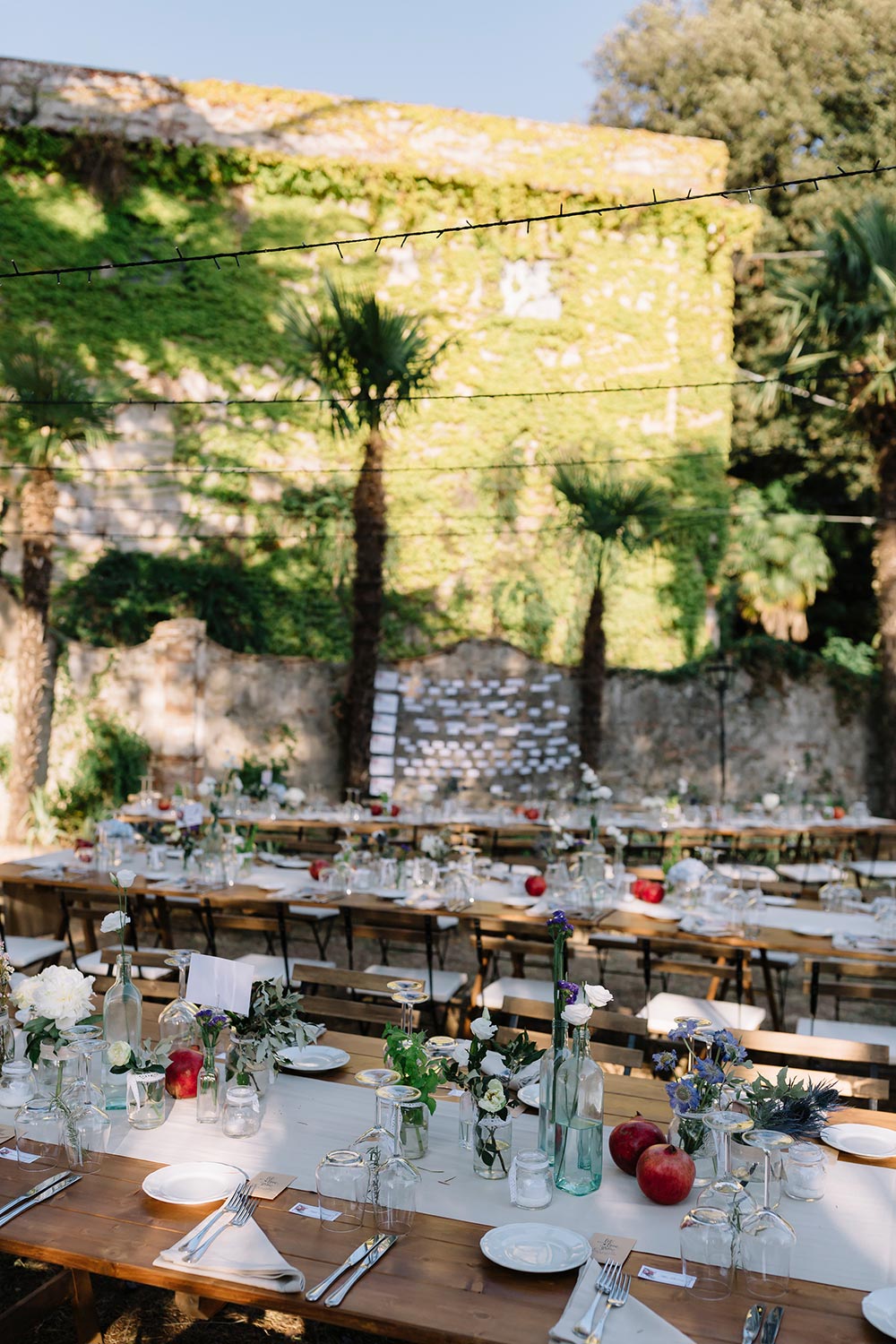 Eliza’s bouquet was made of blue, white and green coloring with herbs to give fresh scents. A large floral arch hung above their ceremony area and two large olive leaf wreaths hung from the ceiling in the dance hall. They used elements of French, Australian, Armenian, Morrocan, Christian and Jewish traditions. 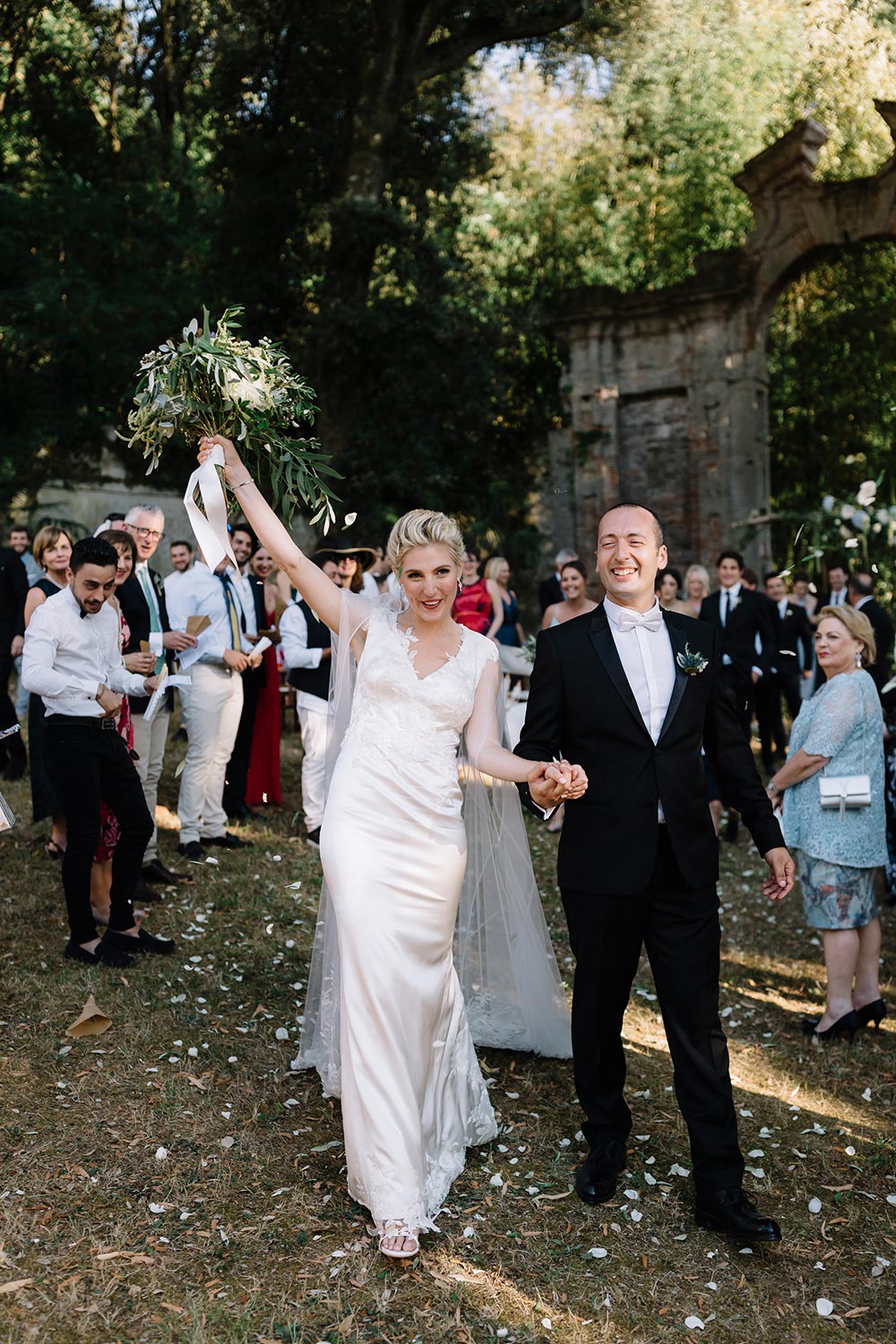 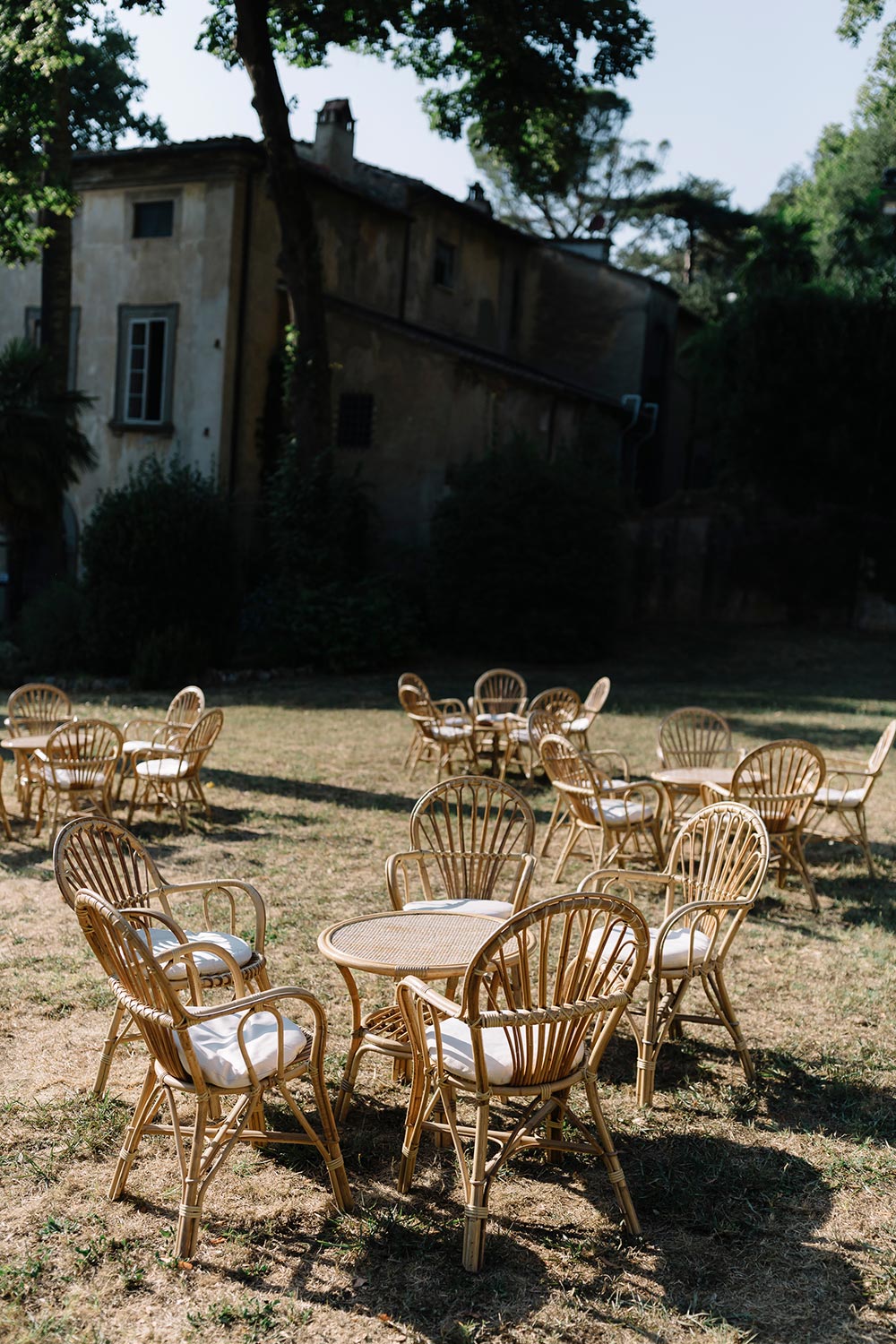 They included the pomegranate in the invitation design and decorations because in Armenian and Morrocan culture it represents prosperity in marriage, fertility and love. These pomegranates were specially ordered in a deep red to contrast to the natural blues and greens in the flowers and were dispersed on the tables. 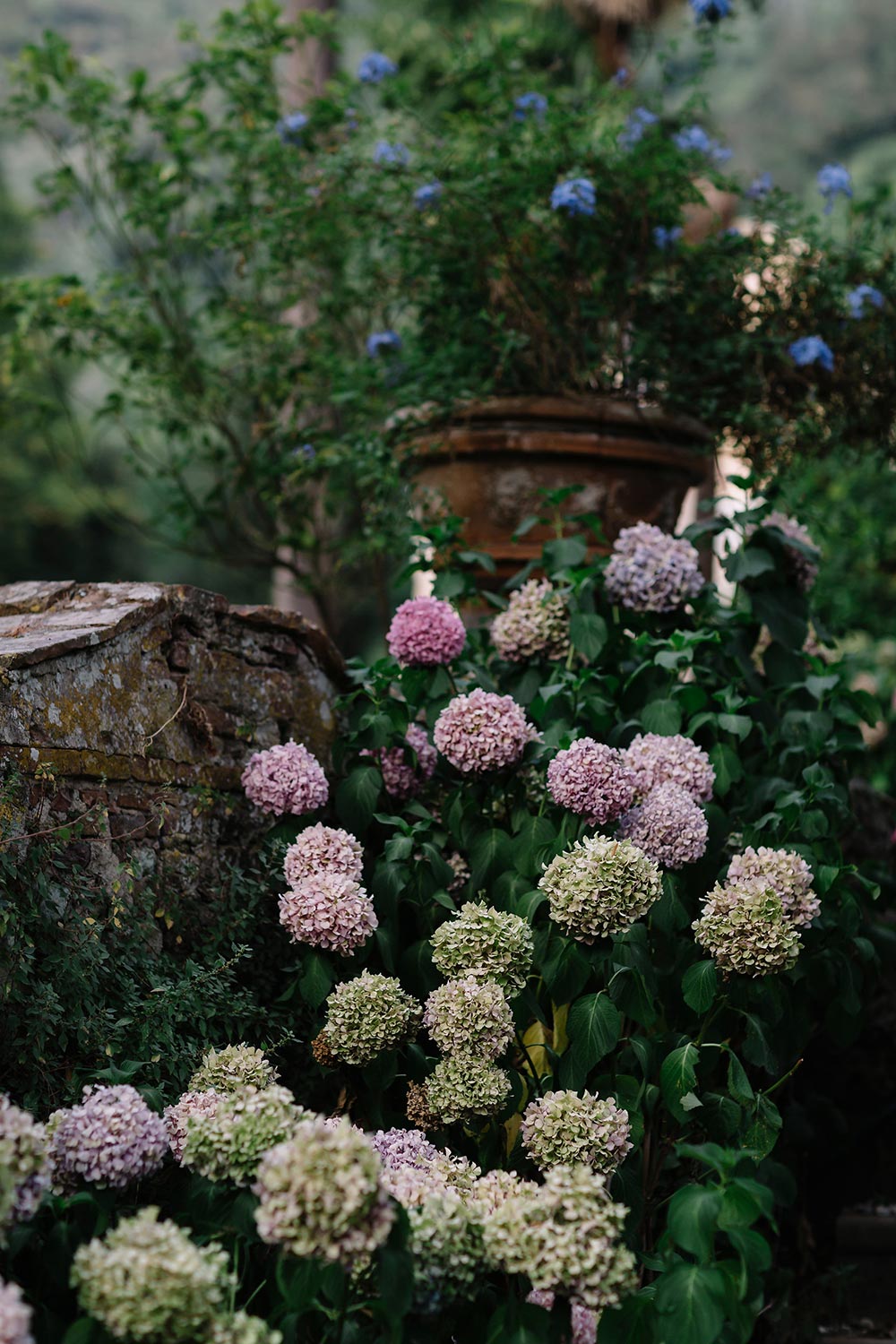 To pick up on the traditional raw and natural vibe of the location, they also included the parasols and hand fans, for the heat as well. It was important to have a mix of traditional and modern, and Eliza made most of the decorations herself.

10 Bucolic Hotel Wedding Venues in Provence You Have To See 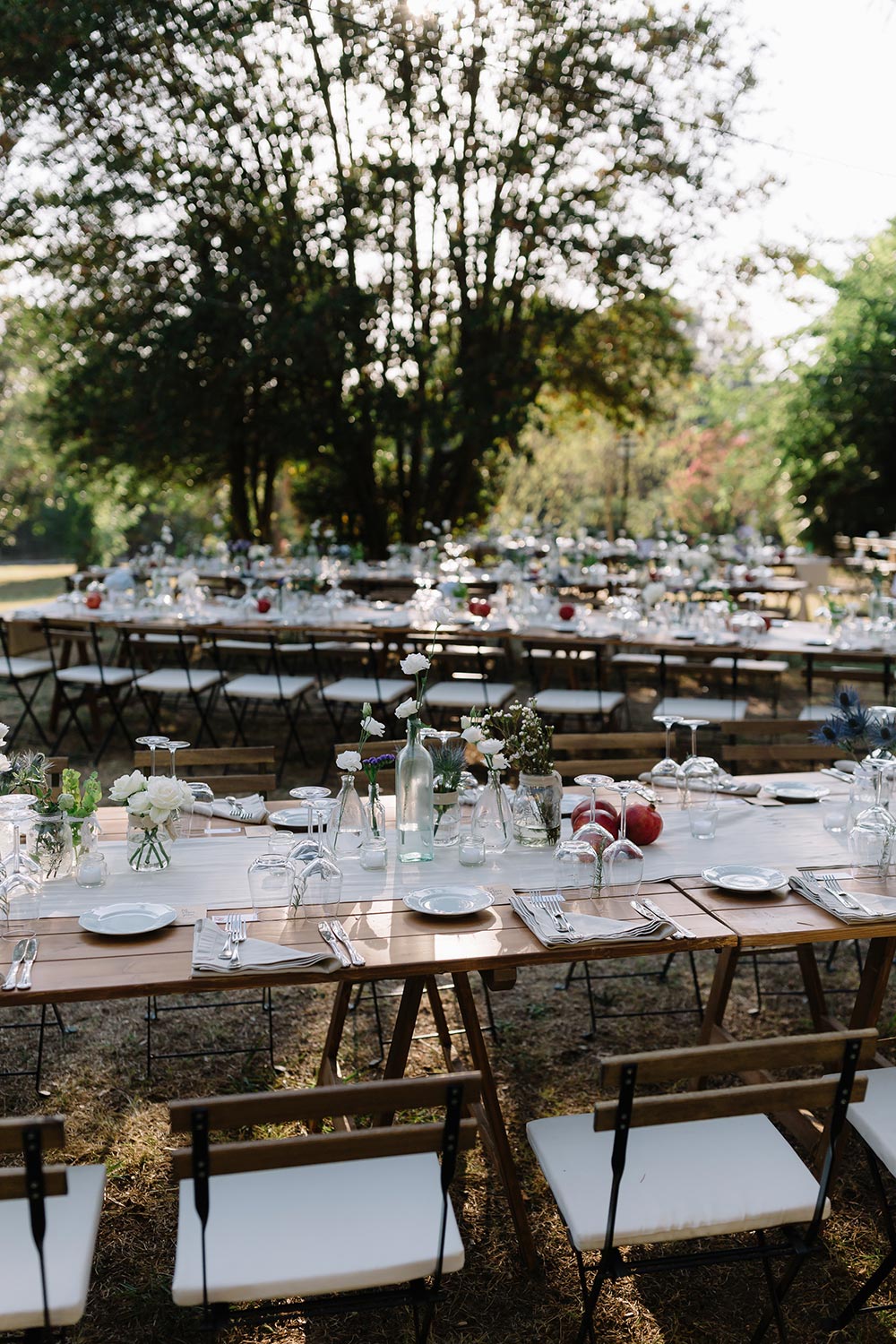 The dress was designed by Eliza and her mother in law, Claudine Elbaz – fashion designer. Together they shopped the fabric and lace, choosing each element before making the dress with a haute couture dressmaker in Paris. Eliza’s mother Jennie played an important role from Australia, participating in the process and all fittings via Skype which was very special for Eliza. The key element to the dress was the long cape, which had hand embroidered flowers flowing up the back. 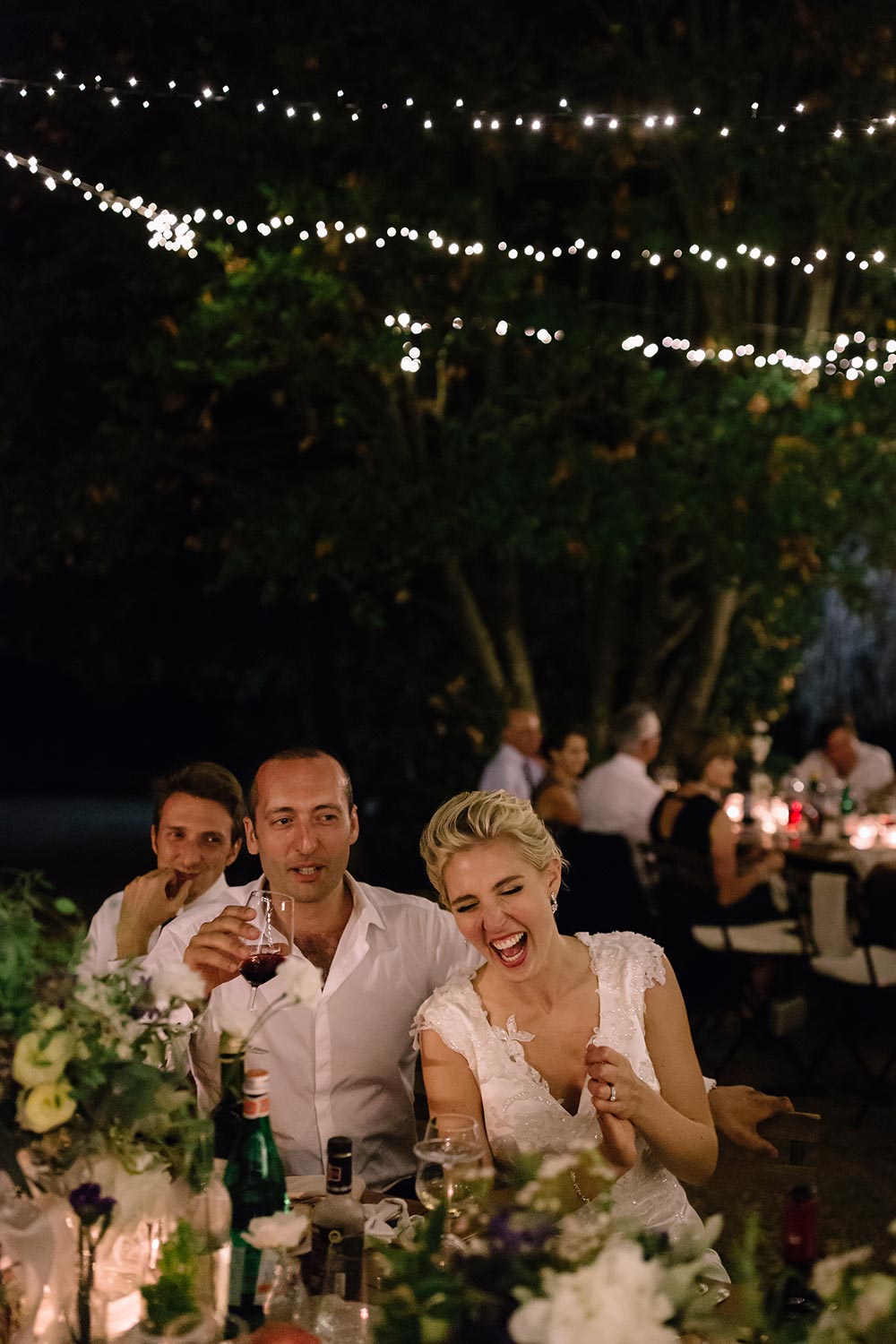 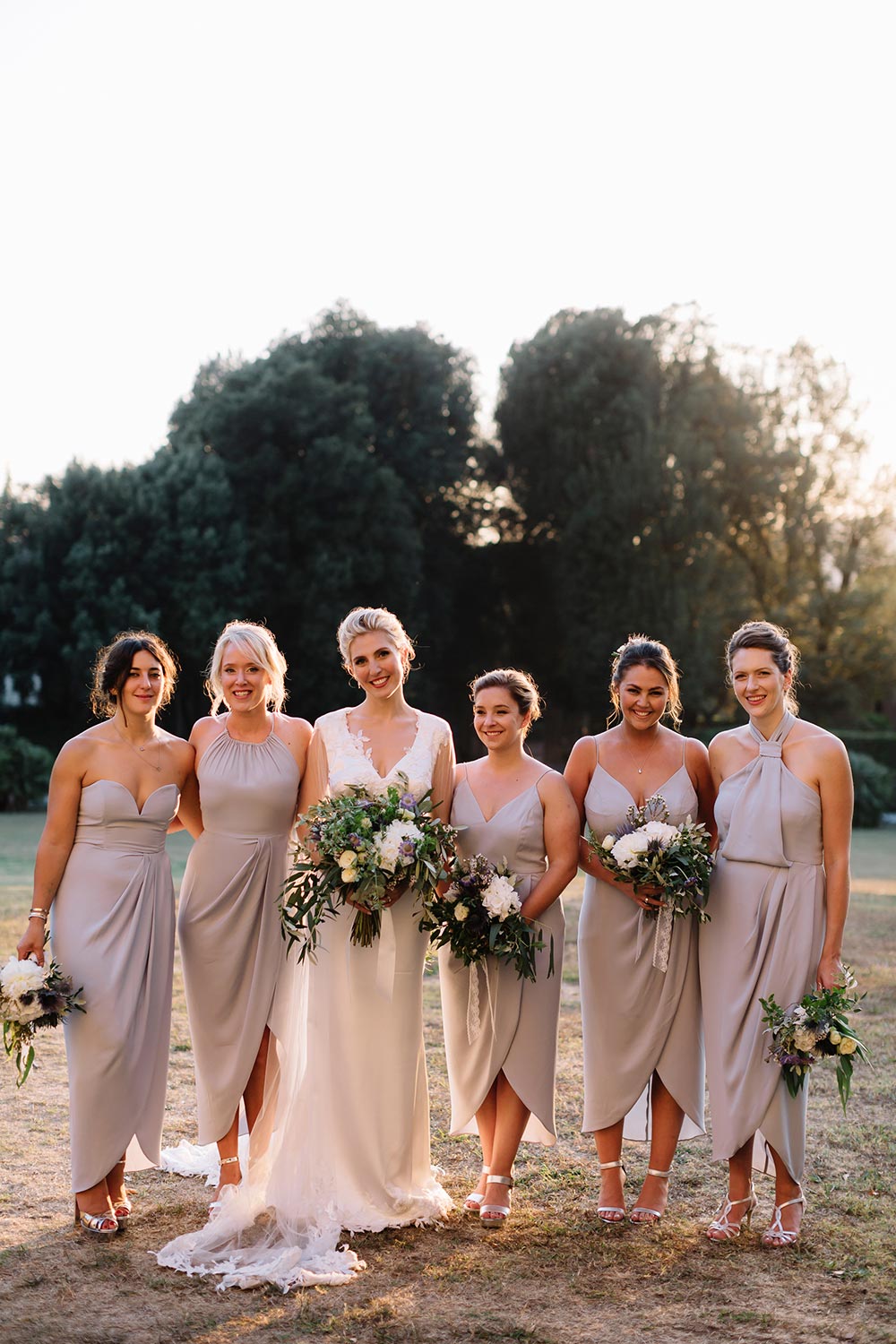 The whole wedding was designed like an opera or theatre production, moving from one scene to the next. They began in the front of the villa then moved to the back in the rustic gardens and 15th-century ruins for the ceremony. Then a post-wedding cocktail in the gardens was followed by a standing buffer under a large oak tree and finally a three course sit down dinner in another area of the park under a canopy of fairy lights from Giordana. We ended the night in the dance hall for dancing which went till sunrise. The food was pescatarian with all organic local products reflecting Eliza and Alex’s lifestyle choices. 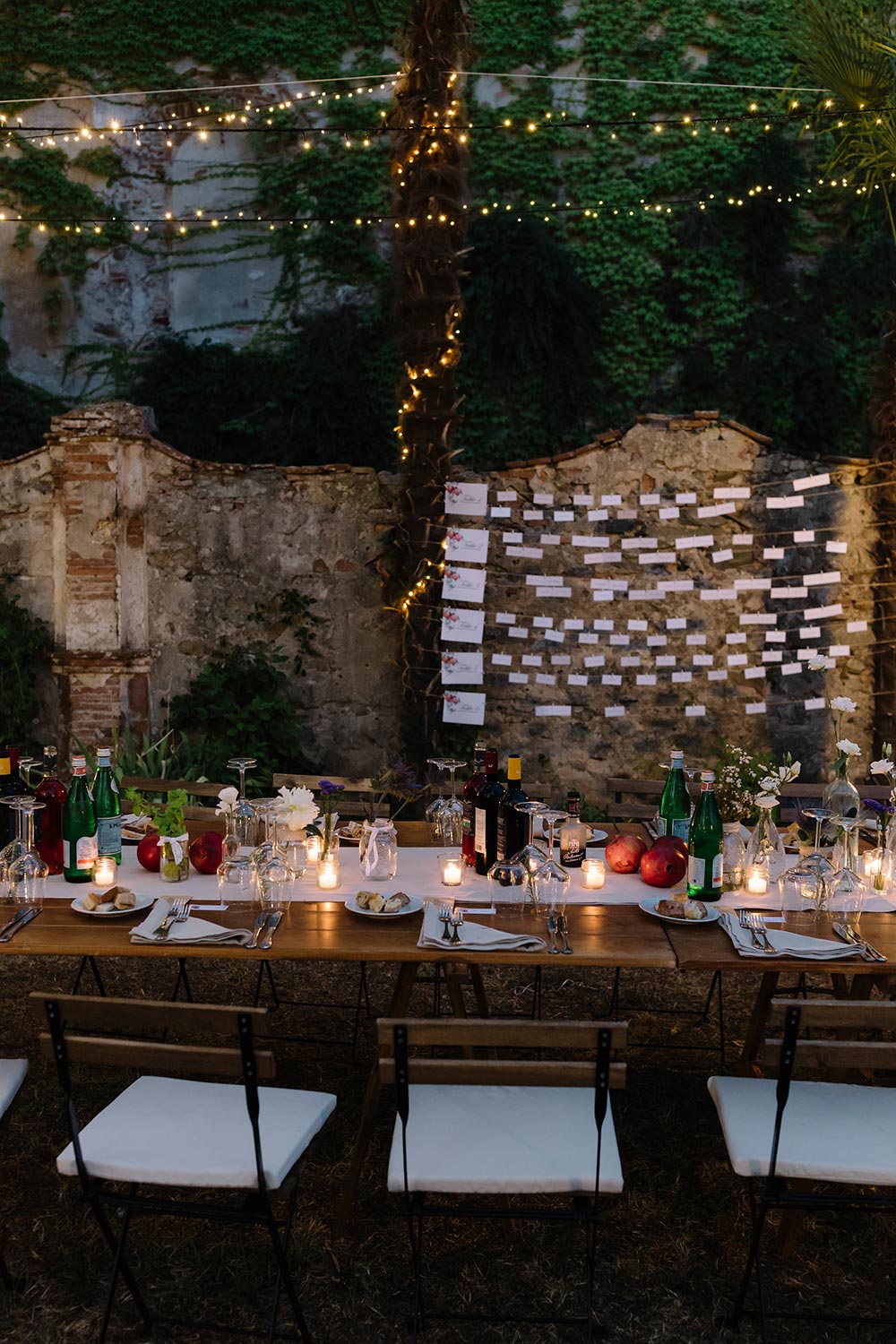 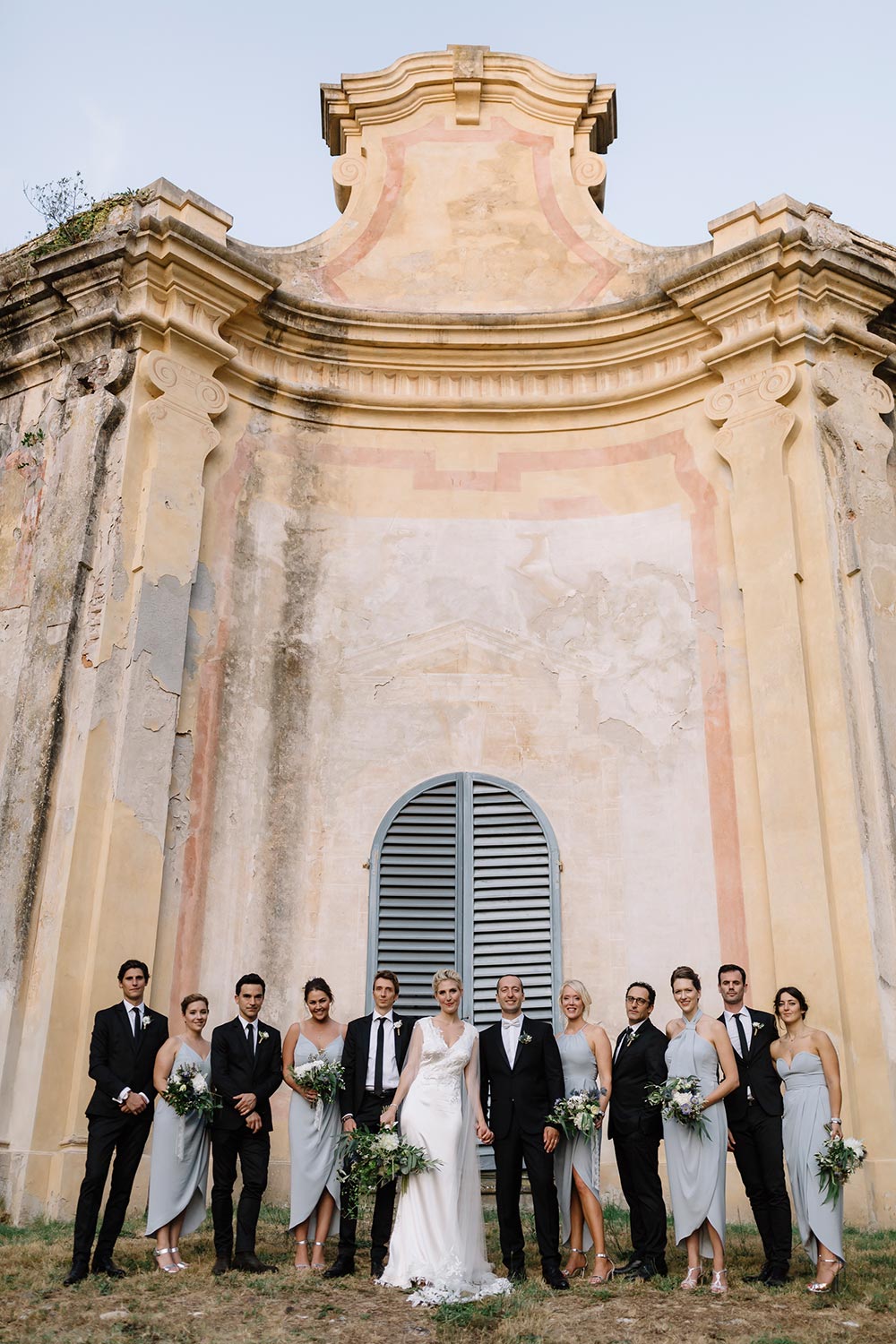 For their first dance Eliza and Alex did a flash mob with their bridal party. Uptown Funk was the choice of song, choreographed by Eliza. Fairy lights made a reference to Eliza’s obsession with fairies and magic as a child, while the rustic wooden tables called upon Alex’s love of the countryside. 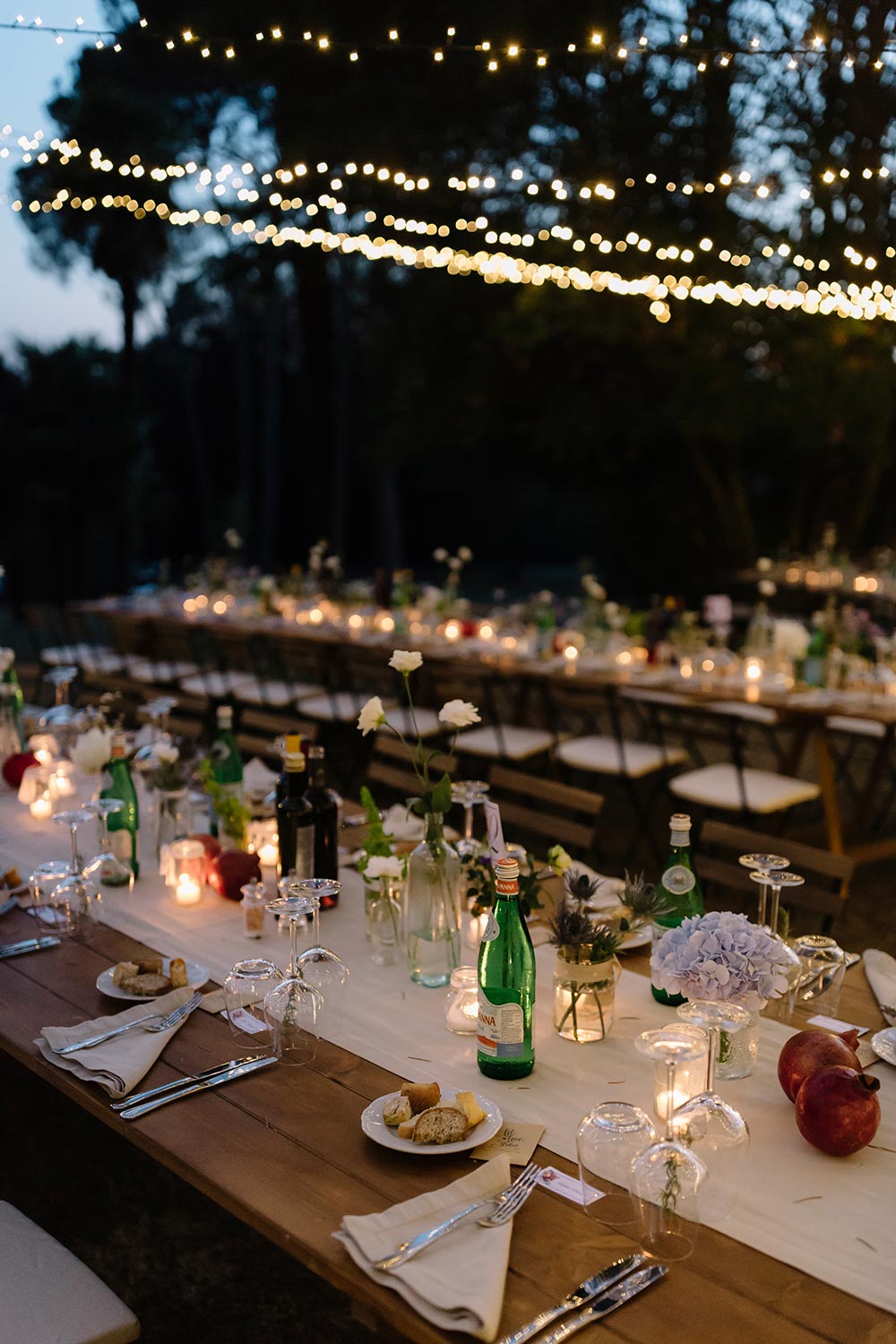 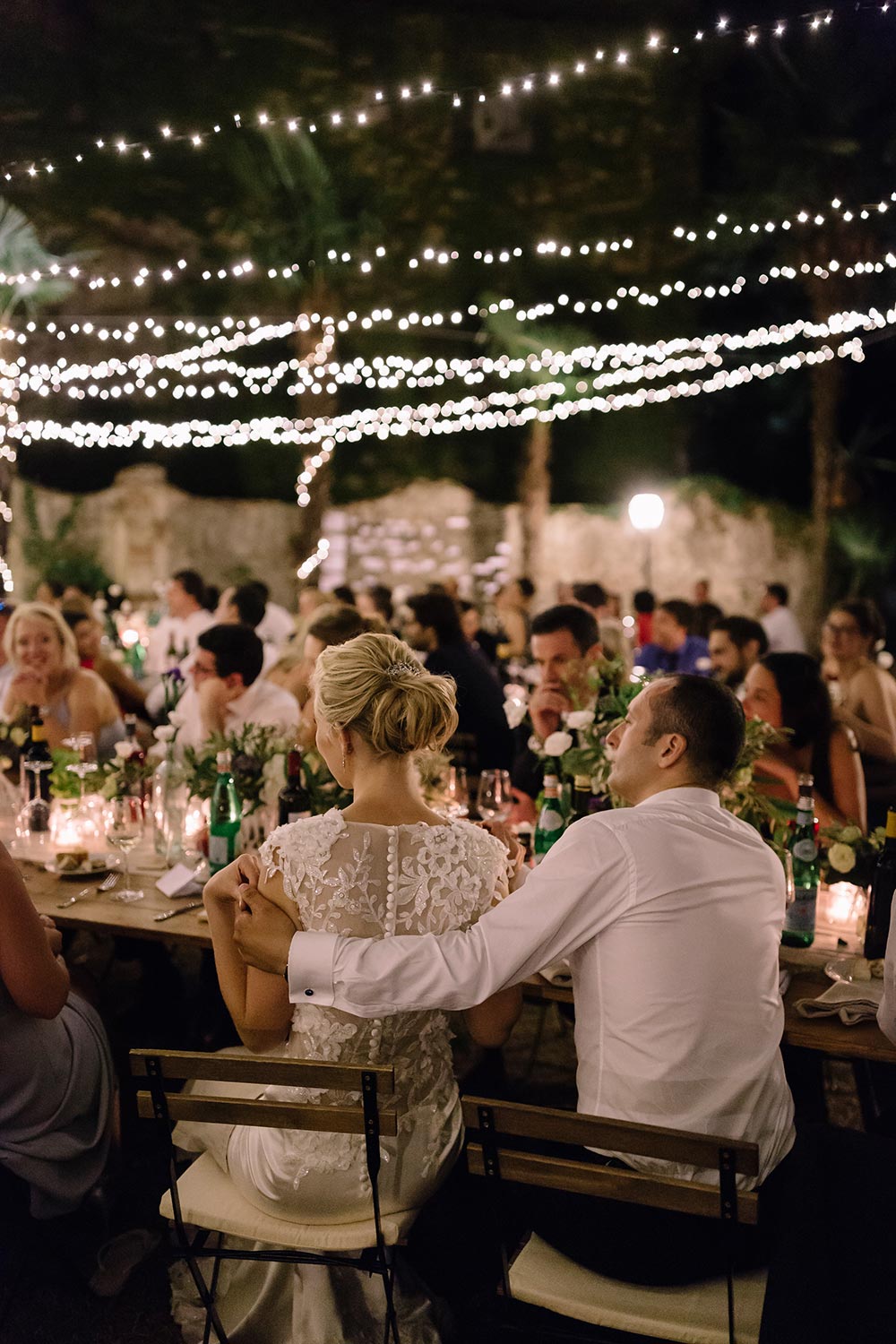 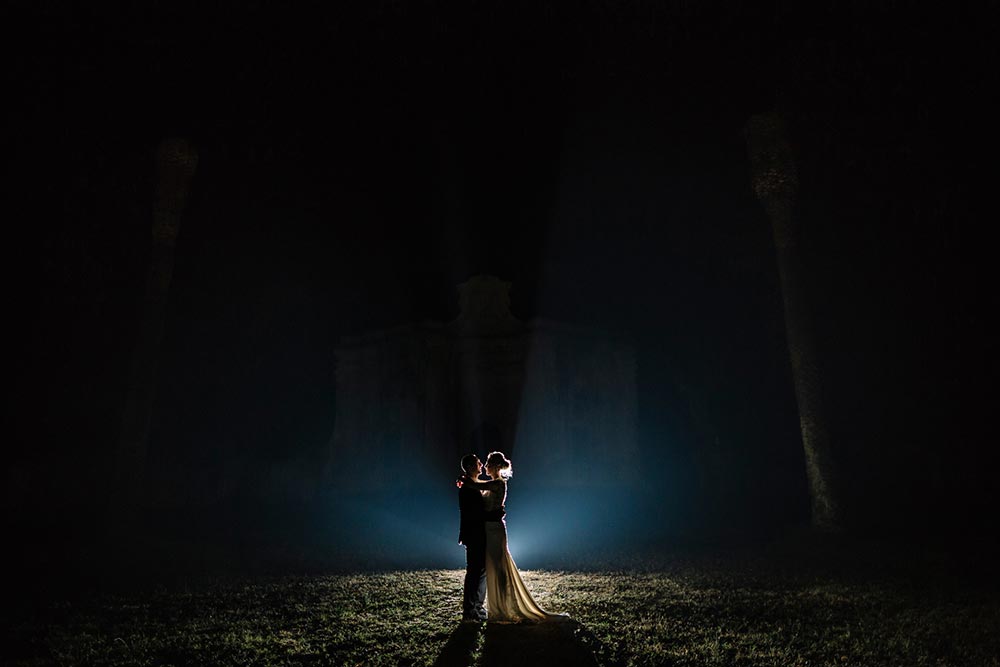 10 Bucolic Hotel Wedding Venues in Provence You Have To See