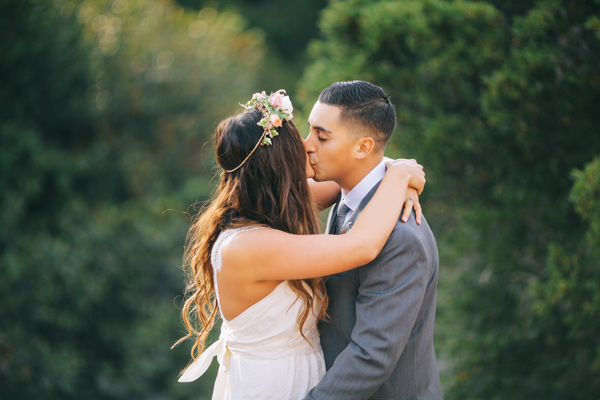 Today’s wedding is a perfect blend of all the styles we love, which results in a wedding we just can’t take our eyes off of. Danielle and Eric began dating at only 14 years old, and were even married by the groom’s own sister who had watched the relationship grow since childhood. Don’t miss any of the sweet details captured by Priscila Valentina!

From the bride, Danielle: I originally wanted the style of my wedding to be more on the rustic side but after researching and looking at blogs of other weddings I realized that I really loved the vintage styles that were being done. So from there I kinda just had the idea of doing more vintage with a little bit of rustic to it. I didn’t exactly have a theme but knew I just wanted it to be as simple as possible and nothing over the top. As far as colors I wanted to have neutrals with light pastel colors. I told my bridesmaids to try to find something neutral and that they could pick their dress and if I liked it then it was fine for them to get. It turned out that all of them were only finding dresses that were blush color so I just decided that they all just had to be blush and since the guys were wearing grey I knew that would work out perfectly. So overall my colors were neutral with soft pinks and of course our venue was full of greenery so that helped finish everything off.

Oh one thing I wanted to point out that was very special to me was the fact that my sister-in-law was the one who married us. My husband and I began dating when we were 14 and I became friends with his younger sister right away and she has become one of my best friends. It was very meaningful because she has watched us grow in our relationship for the last 12 years. So when she threw the idea out there I couldn’t have been more happier because she has been there through it all and truly knows us as individuals and a couple. Her marrying us was one of the highlights of the day.

Any advice for couples planning their weddings now? After going through this entire experience the one thing I would want to know if I was just starting this process would be to have a small wedding. We had about 200 guests and it was extremely overwhelming. Most of our time was spent just saying hi and that was it. There wasn’t enough time to have conversations with people. So any advice would be to have a small intimate wedding. It will be hard to cut down the list of people but well worth it. Oh and make sure you EAT!!! You don’t want to have an empty stomach because it is such a long day.

View all images from this wedding in the gallery

Wedding Music:
Bridal Party Processional: “What Would I Do Without You,” Drew Holcomb
Bride’s Processional: “Like Real People Do,” Hozier
Recessional: “You Are the Best Thing,” Ray LaMontagne
First Dance: “All I’m Thinking Of,” Tyrone Wells
Father/Daughter Dance: “Somewhere Over the Rainbow,” Israel Kamakawiwo’ole

A Fritillaria Wedding With Pastel Lilacs and Garden Blues

50 Summer Bridal Bouquets That Give Us A Watermelon Sugar High